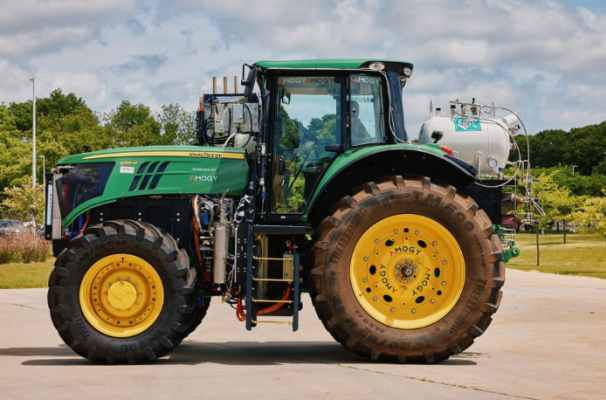 In late May 2022, Amogy, Inc., a Brooklyn, New York-based firm, presented a zero-emissions, ammonia-fueled tractor. Amogy integrated its ammonia-to-power technology inside a regular mid-size John Deere tractor for the demonstration, giving it a capacity of 100 kW.

The technique employs ammonia cracking modules in conjunction with a hybrid fuel cell system and a liquid storage tank. Several times throughout the demonstration, the ammonia-fueled tractor was run and refueled. The demonstration was held at Stony Brook University in New York.

Amogy has created a small, high-efficiency reactor that cracks ammonia and utilizes the hydrogen to power a fuel cell. The design leverages the superior physical characteristics of liquid ammonia to carry the performance advantages of hydrogen far from the supply source and does so at lower operating temperatures and higher efficiency levels than alternative designs.

Ammonia is a poisonous chemical that is neither flammable nor explosive. Regardless of its toxicity, the material has been embraced and utilized in industry for more than a century. However, because of its toxicity, ammonia is not suitable for consumer automobiles, which is why Amogy is exclusively targeting business vehicles.

Although ammonia is currently more expensive per dollar of energy than traditional fuels (e.g., gasoline or diesel), it is still far less expensive than other prospective alternative fuels, such as hydrogen. By 2035, the cost of “green” ammonia will be comparable to that of diesel.