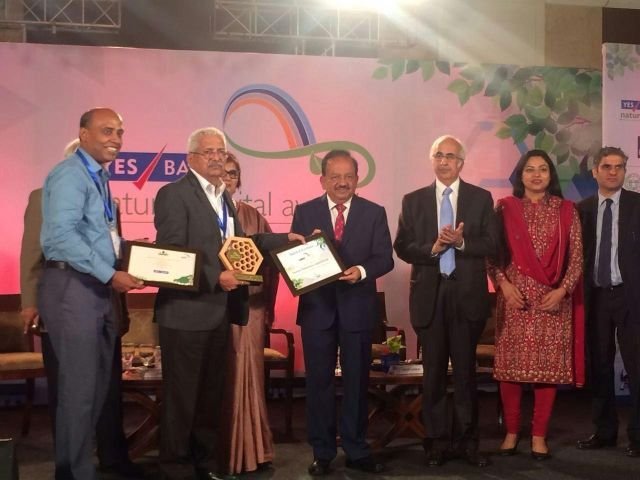 The esteemed award was conferred to GVK MIAL by Dr. Harsh Vardhan, Union Minister of Environment, Forest & Climate Change and Ministry of Science & technology and Earth Sciences, Government of India at a colorful ceremony held in New Delhi recently. As a part of the award felicitation, MIAL has also been honored with plantation of 500 trees at Sitamata wildlife Sanctuary, Rajasthan.GVK MIAL was adjudged the winner post a detailed scrutiny and site inspection which was carried out by an expert panel from The Energy and Resources Institute (TERI) & Yes Bank which scrutinized 120-plus corporate houses.

The accolade was bestowed to GVK MIAL for consistently achieving and implementing various environmental and social programs that corroborated well with – Natural Capital – a term used to describe the value of the resources and eco-systems endowed by mother earth, which are essential for economic growth.

Making the announcement, a company spokesperson said, “Sustainability is at the helm of all projects and initiatives that are undertaken at GVK MIAL. An overwhelming achievement, this award is a testament of the unswerving commitment shown by the company on the path towards the ideology of holistic and sustainable development.”

CSIA has achieved this highest ACA level of Neutrality in recognition of its GHG management initiatives with greater awareness and sensitization of the stakeholders towards the airport industry’s response to the challenge of climate change.

In addition to this, GVK MIAL was also presented with the prestigious ‘Gold’ certification at the ‘GreenCo Summit’ 2016 and was awarded the Indian Green Building Council (IGBC) Platinum certification in 2016, making it the first Indian airport to hold the platinum rating within the Existing Building (O&M) Rating System for its environmentally sustainable profile.