Solar trees to light up parks in Kolkata 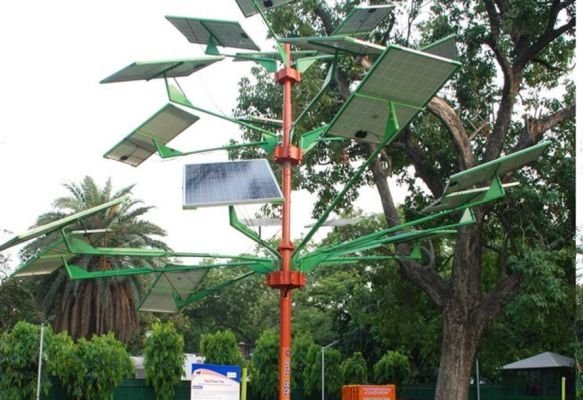 The West Bengal Government is taking a lot of initiatives to increase the share of renewable energy to the total power requirement of the state. Among renewable energy sources, solar energy is the leading contributor.

Now, the government is going for a new concept in solar lighting solar tree. A solar tree is a set of solar panels bunched together like a tree, connected to a central pole. This type of ‘tree’ is going to be one of the crucial elements in making Kolkata an environment-friendly city.

The first is going to be set up at a park in south Kolkata, and later on, would be set up across the state. Each day, such a tree would be able to produce 5 kiloWatt (kW) of energy. Considering also the stylish object that it is, these would lead to both the saving of both money (from less use of conventional energy) and the beautification of landscapes. Another advantage of the solar trees is that whereas panels to produce 5 kW energy would take up a space of 500 square feet (sq ft), whereas a solar tree producing the same amount of energy would take up an area of just 9 sq ft.

Each tree would have 20 solar panels, spread out like the branches on a tree. Each panel would produce 250 watt (w) of solar energy, leading to a total of 5000 w or 5 kW. The height of each tree would be 25 to 30 feet (ft). However, to enable easy maintenance, the panels would be put up in three layers at a height of 12 feet. Initially the trees would be east-facing, but later on they would be made to rotate so that the panels move along with the sun from east to west, in order to capture the maximum amount of energy.

Central Mechanical Engineering Research Institute has designed the solar trees. They are going to be made by a nationally licensed company. In another related development, encouraged over the drastic 80 per cent fall in electricity bill at Deshapriya Park after the installation of solar-powered lights two years ago, Kolkata Municipal Corporation (KMC) is all set to light up Jatin Das Park and Maddox Square with solar lights. The installations were inaugurated on October 24. According to a KMC mayor-in-council member, the target is to cover all major parks with solar lights in a year or two. This will have great impact on the environment.

This is sourced from UNI