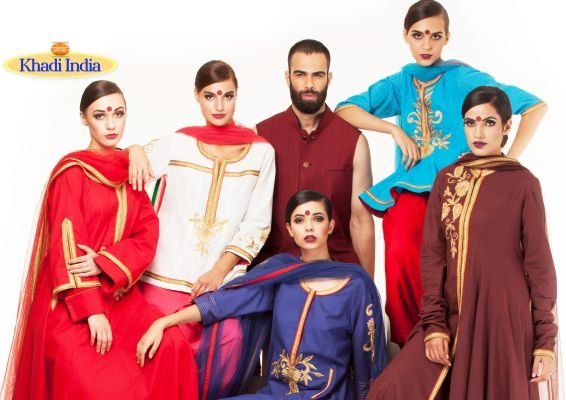 High streets of Dubai, Chicago, Mauritius and Johannesburg may soon showcase khadi as the next big fashion find. And its endorsement as an environment-friendly fabric may come from no less than the United Nations.

In short, the humble handspun fabric is set to get a global makeover, similar to a dramatic rise in India over the last three years.

Endorsed by Prime Minister Narendra Modi, sales of khadi have rocketed by 34 percent in the last three years, the fastest it has grown since 1947 when Khadi and Village Industries Commission (KVIC) first started selling the desi khaddar.

According to a survey by Synergy Foundations-Impact Beyond Border, khadi is an indigenous Indian product after yoga, as also it is an item second most associated to India by non-Indians. The Narendra Modi government is trying to cash in on this craze and take the humble khadi across borders as India tries to sell its soft power on the international stage.

To start with, the ministry is meeting representatives from across the world in an exhibition at the capital this month end. The agenda is not just to pitch khadi to them as a business proposition, but to sell the idea of khadi as the cloth of India.

From not figuring on the fashion footprint of the country, khadi has come a long way to call itself what the present generation tags as ‘cool’. This new-found cool quotient of the fabric has also become a profitable institution.

Constant push by the government of India and the increasing trend of using organic products worldwide saw khadi sales going upwards. It was only last year, the low-profile khadi and products from village industries touched the Rs 50,000 crore mark for the first time in India in the last 65 years. KVIC clocked sales worth Rs 52,000 crore in 2016-17.

However, it is not just the sale of Khadi that grew in the last three years. With an increase in demand, Khadi production also grew by 32% in the last fiscal year 2016-17.

After yoga, India is hoping that Khadi becomes its biggest export to the world. And there are signs that it will be.