Uber Destroys Tens of Thousand Of Its E-Jump bikes 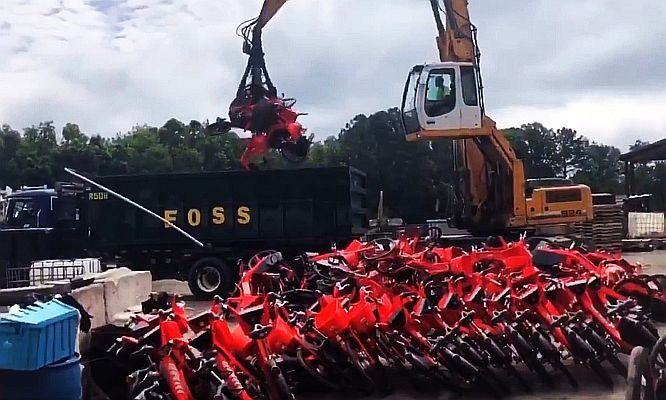 Uber has sold its loss-making e-bike division to Lime and now it is busy destroying tens of thousand of its electric red Jump bikes as they have decided to ‘recycle’ its older model vehicles due to the maintenance, liability, safety and technical concerns.

The company added that the new models of bikes and scooters were transferred to the mobility start-up Lime.

However, this decision has not gone well with supporters of the green fuel and cycling enthusiast, and the footage of the e-bikes and scooters being destroyed at a North Carolina recycling center irked many on the social media.

They argued that donation to underprivileged or to public schools would have been the best choice. Destroying these bikes is a real mortal sin. How many thousands of children wouldn’t be happier and healthier using these bikes?

Uber on 7 May had announced a deal that saw Lime take over the Jump bike business. As part of the deal, the company invested $170m in Lime, and Lime acquired Uber’s bike and scooter business, Jump.

According to various reports, over 20,000 e-bikes were discarded and sent to scrapyard.