Clean Energy for the FUTURE 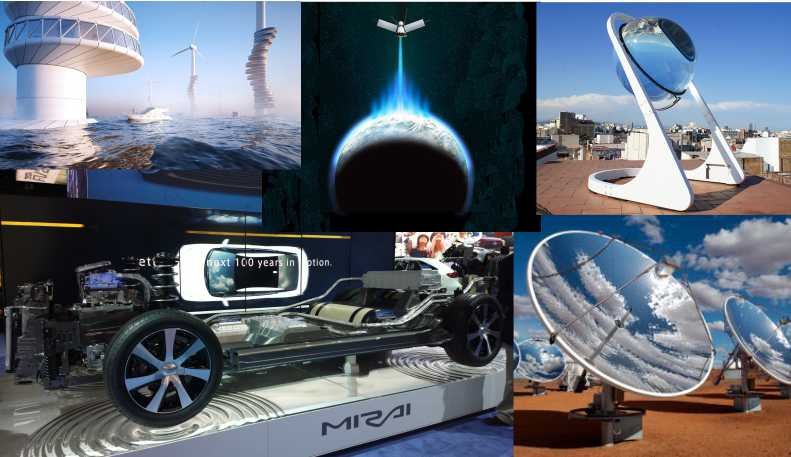 The past century has seen rapid developments in all fields paving a way for a better and comfortable future. One of the major factors responsible for this development is energy sector, from powering the industrial revolution in its last stages to the development of all the gadgets that we use today, it has effected every aspect of modern life.
But the generation of electricity from fossil fuels has hurt the environment and is on its way to causing catastrophic consequences to the life on earth. Recent initiatives have been taken by the countries to make amends and adopt renewable energy sources to combat the situation. But the technology required to give us a fighting chance against climate change is still in the making. The future of energy will be based on few of the following ideas.
Solar energy from space
This technology will incorporate the trapping of the sun’s rays outside the earth’s atmosphere and beaming them back to the surface in the form of microwaves which will then be converted into electricity. Despite the huge cost of implementing this technology, rapid advancements have been made by SpaceX and the Japanese Space Agency (JAXA) which tested the transmission of electricity via microwaves earlier this year.
Human Power
Humans are spending power every time they do something, walking, running, using the phone, etc. scientists are working on projects which can tap into these activities to generate power. And with the advent of devices using less and less power some basic movements will be able to generate electricity to power small devices. Lawrence Berkeley National Laboratory is one of the few who are making headway into developing this technology.
Hydrogen Fuel cells
Hydrogen fuel cells have the potential to become a major solution to emission from vehicles. These cell only have one emission of water and are capable of being generated at small points of use at any location with water and a little power. This also has the added benefits of being completely silent and much more efficient than normal fuels. Toyota Mirai has been a milestone in the history of hydrogen fuel cell by making a major mark on the market.
Geothermal Energy
The latent energy hidden inside the surface of the earth is highly beneficial and has negligible emission levels. The lava inside the earth is very hot and the water it heats up is converted into highly pressurized steam which can be converted into electricity. The Icelandic Deep Drilling Project is one such instance where this form of energy proved to be of great use.
Nuclear waste
Nuclear waste is major problem for most of the developed world which had adopted nuclear technology for energy generation. The nuclear waste from uranium – plutonium can be in a radioactive state for thousands of years thus posing a very threat to our safety. This plutonium can be used in new types of reactors call the gen- 4 rectors which uses liquid sodium to cool the uranium rods instead of soft water and has an efficiency rate of 95% which is much better than the soft water reactor’s 5%.
Solar windows
The present day world is investing heavily in solar power probably more than ever before on any other technology. This has prompted researchers to develop solar panels and to integrate them with various items. Companies like the Solar Windows Technology Inc. are making great strides in developing this technology.
Floating wind farms
Wind energy is another major player in the present day renewable energy industry and many companies like the Altaeros Energies, who have developed turbines carried up inside floating balloons which are capable of harnessing more wind power at higher altitudes.
Nuclear Fusion
The nuclear reactors of the present day world are following the concept of nuclear fission which is thought of being less beneficial, on the other hand there is nuclear fusion which involves the fusing of atoms together instead of splitting them. This is method supplies much more yield and is less of a risk in terms of causing a meltdown. But there are various problems to this, most important of which is the creation of a chamber to contain the reaction as the heat produced is massive and no chamber is capable of holding it. But countries like Russia, China, USA and Europe are together involved in the development of this technology in ITER. Various private companies like Lockheed Martin are also conduction research to develop this technology.

Looking at all the technology available today and the focus given to climate change, clean energy and the environment, the research being conducted on these future technologies are of great value and might solve the problems we are going to face that are underway too like the CFC in the air and the melting of ice caps. These technologies show us a ray of hope for the future towards a more clean and sustainable life.