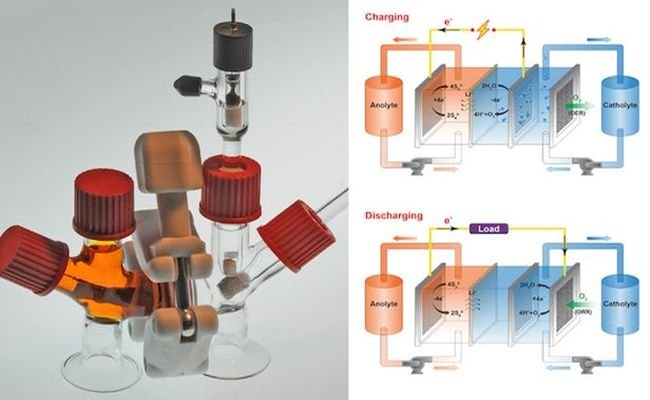 Last week, Massachusetts Institute of Technology (MIT) based (and U.S. Department of Energy-funded) researchers reported that they have developed an “air breathing” battery capable of storing electricity for long periods of time at about $20 a kWh.

For its anode, the rechargeable flow battery uses cheap, abundant sulfur dissolved in water. An aerated liquid salt solution in the cathode continuously takes in and releases oxygen that balances charge as ions shuttle between the electrodes. Oxygen flowing into the cathode causes the anode to discharge electrons to an external circuit. Oxygen flowing out sends electrons back to the anode, recharging the battery. This battery literally inhales and exhales air, but it doesn’t exhale carbon dioxide, like humans – it exhales oxygen.

So What does all this means?

A major issue with batteries has been the need to synthesize materials to increase the energy density of batteries (how much power you can store in a battery of a given size).

We can do it, but the materials required are inordinately expensive. That’s where this air-breathing battery comes in. By relying on sulfur and air, it’s dirt cheap.

The total chemical cost of this system is about 3% that of a lithium battery, but can store electricity for prolonged periods of time for a fraction of the cost now required by less efficient systems. It’s a “flow battery,” where electrolytes are continuously pumped through electrodes and travel through a reaction cell to create charge or discharge.

While lithium–sulfur and lithium-air batteries exist today, the key innovation of the MIT research is combining the two to create a lower-cost battery with comparable efficiency and energy density.

As these batteries discharge over months, it would be an excellent way for storing electricity from unpredictable sources like solar and wind.