Advanced “Plug and Play System” for Shade, Water, and Energy 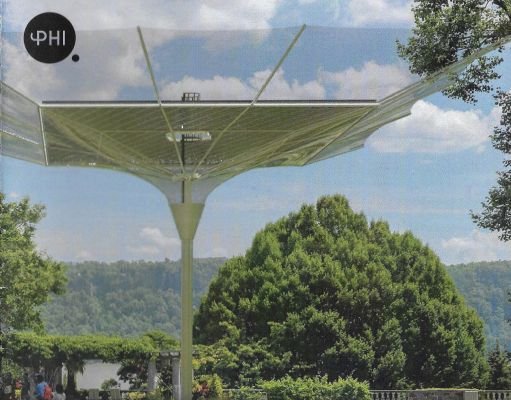 The startup ThinkPhi’s flagship product model 1080 not only produces renewable electricity from the sun (and stores it in integrated batteries), but it can also collect and filter rainwater.

The product, which looks a bit like an inverted umbrella, features solar panels on the top surface, as well as a canopy to collect and funnel the rainwater into the filtration chamber, and integrates LED lighting underneath it. The largest of the models, the 1080XL, has a canopy measuring 20 meters by 20 meters and is said to be capable of producing a peak of 45kW while also collecting and filtering hundreds of thousands of gallons of water per year, depending on local rainfall amounts.

ThinkPhi claims that the large model can “filter over 1 million litre of rainwater” and “can supply energy for large infrastructure projects.” One of the company’s suggested uses is for electric car charging, although no specific data was given about the efficacy of solar charging or the recommended model size for that end use.

ThinkPhi says it has sold some 200 units already, and expects to sell several hundred units by the end of the year. Prices for the units start at about US$1500 for the smallest model, and all models come with a 15-year warranty.