NextGen Tourism on Ganga to get a Solar Push 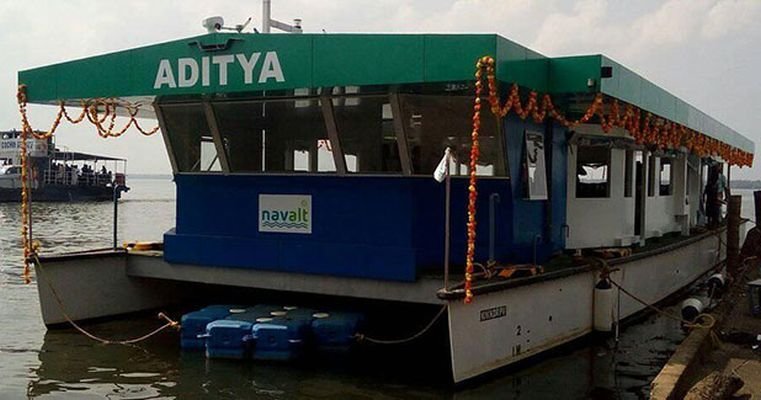 Energy needed to support water transport is usually very high. Innovators in the field have been trying to solve this problem for quite a while now. One of the most pragmatic solutions to this problem is solar ferries. Solar ferries do not pollute water. They do not release harmful emissions in air, are silent and passenger-friendly, and have low operational costs.

A silent disruption is making waves in “Indian Commercial Ferry Market” which is worth thousands of crores.

India launched its first commercial solar ferry named Aditya in the state of Kerala for tourist. This innovation is now coming to the holy city of Varanasi and Allahabad to ferry tourist using solar powered boats instead of old polluting diesel boats.

Navalt, the company behind these solar boats will initially put two boats into operation by this year end and after seeing the response it will be up scaled to 6 more. These boats will have a seating capacity of 75-100 people. They will all house a hotel and restaurant with 25 to 30 rooms.

The ferries most likely will follow the design elements from Nabalt’s experience in Kerala waters and are going to be equipped with two electric motors, 20kW each, which are powered by a 50kWh Lithium battery pack. A 20kWp solar module array charges the battery pack, thereby making the boats a perfect fusion of advancements in photovoltaics, electric vehicle technology, and naval architecture. These ferries can attain a maximum speed of 7.5 knots, and run continuously for six hours on cruise speed.

Expansion of pollution free tourism on waterways is a pet project of current government.

Navalt is also planning to expand its market to states of Haryana, Jharkhand and Rajasthan.