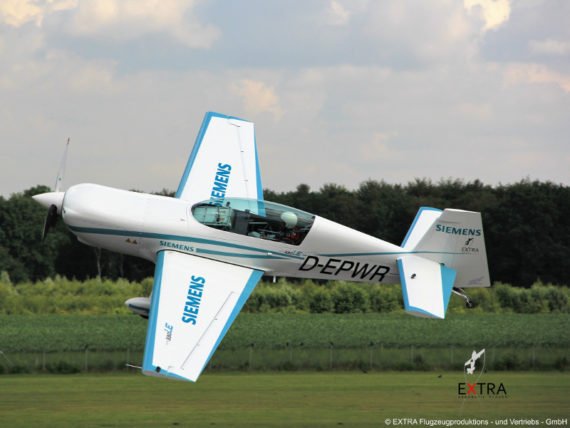 The Extra Aircraft 330LE that has just joined the acrobatic electric air race. It may not end up as a commercial airplane, but there are other reasons it’s important. An electric version of the Extra 300L aircraft out of Germany is what caught our eye most recently.

Walter Extra, founder of the Extra Aircraft company, converted this two-seat electric aircraft to fly quieter, cleaner, and more enjoyably. The Extra 330LE was matted to a Siemens electric motor that gets the aircraft up to 3,000 meters in just 4 minutes and 22 seconds, with a climbing rate of 11.5 m/s. The electric airplane (e-plane) was officially recognized by the Fédération Aéronautique Internationale (FAI) and already won the climb performance world record in November 2016. It also holds some electric aircraft speed records from mid-2016.

The Extra 330LE uses two battery packs made up of 14 lithium battery cells for a total capacity of 18.6 kWh. Its overall weight is approximately 1,000 kg, while its the average climb rate is 2,300 ft a minute.

E-planes are perfect for aerobatics since they don’t fly a long time. The Extra 330LE can be flown for 20-minute flights, which includes takeoff, climbing, and 5 minutes of blissful full-throttle flight.