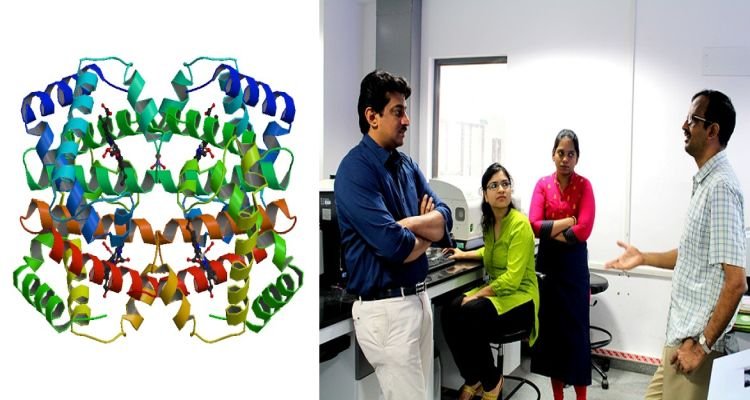 Biological assemblies are thousands of tiny machineries which play collectively important roles towards maintaining the cellular structure and functions, and many of them even play very critical roles. Self-assembly of these tiny machines requires biological fuel to become operational. Scientists have been trying to figure out how these tiny machines are controlled. This could help in controlling engineered organic designs comparable to natural frameworks.

A research team led by Dr. Subi J. George and Dr. S. Balasubramanian at Jawaharlal Nehru Centre for Advanced Scientific Research (JNCASR), Bangalore, have shown that synthetic molecules can grow and be controlled on similar stimuli such as biological systems.

In this study, researchers worked on Actin, a protein which frames the contractile fibres of muscle cells. In living system, Actin assembles on its own using its monomer components under the influence of biological fuel Adenosine Triphosphate (ATP). Actin as tiny machine works like treadmill to support cellular movements.

The researchers have mimicked ATP-selective actin- like self-assembly in the laboratory very similar to what happens in the natural conditions inside the cells. They could observe monomer subunits undergoing ATP-fuel-driven elongation resembling natural actin self-assembly. Interestingly, when researchers used ATP-hydrolysing enzymes, it prompts actin dissociation. The results of this study have been published in the journal Nature Communications.

Speaking to India Science Wire, Dr. George said “since the stimulus in our case is ATP,which is one of the most universally present chemicals, this makes our work a benchmark in what can be achieved synthetically. Also, our study has come closest in synthetically mimicking natural protein Actin’s assembly, a protein which plays an important role in various biological functions.These outcomes will guide investigators to search for more synthetic analogues of important biological self-assembly”.

“Using biological cues like ATP opens up routes for bio-adaptable systems. A step even further perhaps is the possibility of an organic electronic device in interface with biological live feed. Such a system would be highly efficient and uniquely adaptive in reporting live biological changes in a body,” he added.

Commenting on the research findings, Prof. E. W. Meijer from Eindhoven University of Technology, The Netherlands- who is not involved in the work, said, “researchers have tackled one of the main challenges in mimicking natural systems. Where chemists normally can control the assembly of small molecules in large one-dimensional aggregates only by solvent or temperature, Nature assembles and disassembles these structures by chemical fuels – chemical reactions that take care of the growth. This study is an important next step in the development of functional life-like materials and systems.”

The research team also included Ananya Mishra, D. B. Korlepara, Mohit Kumar, Ankit Jain, N.Jonnalagadda, and K.K. Bejagam. The study was funded by the Department of Science and Technology.