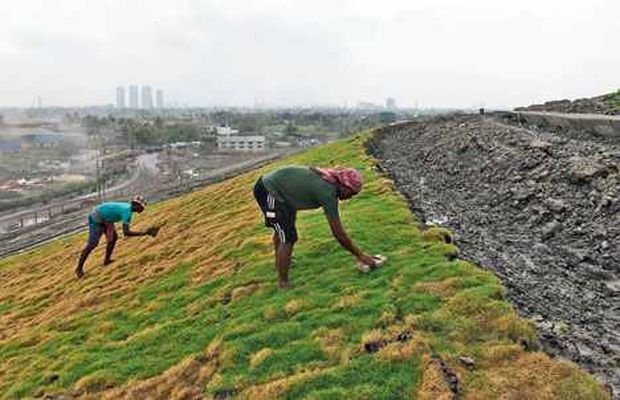 Calcutta Municipal Corporation is doing a Rs 48-crore makeover at 100ft-high Dhapa garbage mound and plans to turn it into a revenue-generating facility.

The Dhapa mound, which can be seen from the Bypass, was abandoned in 2009 after it had reached its capacity. The civic body has opened another dumping ground adjacent to it.

The state pollution control board is steering a Rs 48-crore World Bank-funded scheme aimed at preventing contamination of ground water from the waste that had accumulated at the 29.64-acre site for over 25 years and beautifying the site.

Municipal Corporation is planning to set up a revenue-earning facility, such as banquet hall, at the site once decontamination and beautification are over. A horticultural garden with ticketed entry is another option. However a committee will be set up to decide how the space can be commercially exploited once the beautification is completed.

Two other long-abandoned garbage dumping grounds, both off the Bypass, are being successfully commercially exploited.

Swabhumi stands at one of the sites and PC Chandra Gardens at another. The Swabhumi site was abandoned in the 1950s and the other in the 1970s.

As part of the drive to prevent contamination, a sheet of polyethylene and several layers of soil, totaling around 5 feet, are being laid on the waste, an impermeable high density polyethylene (HDP) layer above the waste that will prevent water to percolate through the layers of waste. The garbage mound would then be covered with Mexican grass by the end of the month.

Had there been no HDP layer, rain water would have percolated through the waste, absorbing toxic materials and contaminating the ground water. Apart from the groundwater, the Dhapa site also poses a risk to the adjacent East Calcutta Wetlands. If heavy metals contaminate the wetlands, it will have a disastrous effect on fishery and agriculture in that region so a network of drains has been built to carry the rainwater falling on the green patch.

Another set of pipelines is being laid to drain out the methane gas trapped in the waste. Ten methane collection points have been built on top of the garbage mound.