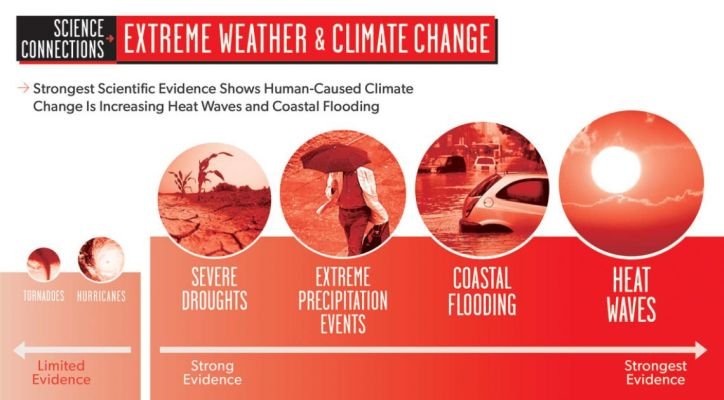 Every time an extreme weather event like the Kerala floods occurs, there is a great demand for information on its causes. The question uppermost in public discourse is if such events can be attributed to climate change and global warming.

Detection and attribution are the foundations of climate change science. Climate change can be detected either as long term or low-frequency changes such as warming, sea level rise or mean precipitation changes. Climate or weather extremes are not uniformly definable but the magnitude of events and their frequency or return period are typically used as indicators.

Attribution means either quantifying the change in risk or probability of an extreme event that can be attributed to human influence on climate or quantifying specific thermodynamic and dynamic patterns that contributed to the extreme. Thermodynamics in this context is conceived in the warming, humidity increase or sea level rise. Dynamics corresponds to changes in winds and circulation patterns which can be decomposed into natural variability and changes due to human activities.

The human impact on climate can be captured in the changing radiation balance at the top of the atmosphere. Increased greenhouse gases warm the planet and perturb the balance between incoming solar energy or the shortwave radiation and the outgoing longwave or infrared energy from the planet. This radiation balance is the net forcing of the climate including the extremes while the earth’s natural variability acts as the noise separating the human impact on extremes.

While the increase in temperature and humidity due to increased radiative forcing of greenhouse gases can be easily computed and understood, deciphering the response in precipitation is a serious challenge. Warmer temperatures and increased humidity provide favorable conditions for building atmospheric instabilities which should lead to more rainfall. However, the heat and humidity also alter winds and circulation of the atmosphere and hence the oceans. This leads to changes in the location and amount of evaporation and the total amount, intensity and frequency of rainfall.

For example, the total amount of monsoon rainfall may be reduced but at the same time the frequency of the number of rainy days can be reduced much more. This means, when it rains it pours. Clearly, it cannot pour everywhere since the moisture supply is finite. Thus it rains cats and dogs in one place while another place will lose its rain. For instance, if it floods in Kerala, then there can be a reduction in rainfall over Maharashtra.

Model simulations of the real world scenario are needed to separate thermodynamic and dynamic contributions. But this separation is only possible by comparing to a world where human influence does not exist – so-called ‘counterfactual’ world. Simulating the counter-factual world requires running a coupled ocean-atmosphere model in the absence of greenhouse gas emissions due to human activity. Such coupled climate model simulations require massive computing facilities.

When the real world and the counter-factual world are simulated with enormous computing resources, the natural variability needs to be subtracted to extract the human-contribution to the observed extreme event. Model shortcomings in capturing natural variability (monsoon and El Niño) can affect the differences in the actual and counterfactual worlds simulated by the models. That’s why attribution studies have to rely on multiple models to increase our confidence in their conclusions.

The posing of the question about human contribution can also lead to counter-intuitive attributions. For example, the heatwaves of Russia in 2010 and Texas in 2011 were not altered in their magnitude because of global warming, leading to a conclusion that they were not a result of human activity. However, their return period or the probability of occurrence was found to be clearly influenced by global warming.

Attribution studies of Kerala floods or other extreme weather events in India will have to ask similar questions. Were the rainfall amounts over parts of Kerala during August enhanced by global warming or were their probability increased or both? Such attribution studies typically take months to complete. The Bulletin of American Meteorological Society publishes the State of the Climate each July tabulating the previous year’s climate anomalies and extreme events including some attribution studies.

The growing demand for attribution information has now led to efforts towards developing ‘Operational Attributions’. In this approach, the highest percentiles or thresholds (e.g., rainfall rates of more than 150 mm per day) and the associated circulation patterns are kept ready based on past events for a given location. For example, an impending El Niño and the expected droughts, floods or winter storms can be pre-computed along with the contributions from local warming and/or circulation changes due to global warming.

If an extreme event does occur, then these pre-computations allow for rapid attributions in near-real time. Another approach is to generate extremes based on model forecasts of sea surface temperatures. These allow for near real-time attributions which are now in more and more demand from communities, governments and businesses such as insurers.

A few attribution studies are available on the Indian monsoon and streamflows, increase in widespread floods, heatwaves, and hydro-climatology of major river basins. Attribution of climate extremes is an essential and effective tool for India, given its high vulnerability to natural disasters and regional disparities in these vulnerabilities.

The money invested in weather and climate prediction is clearly yielding results as seen in the accurate forecasts of many heavy rainfall events in the last several years. Climate scientists also need to have pre-computed thresholds and circulation patterns to issue wise guesses in the immediate aftermath of extreme events to satisfy the demand for information. Such information, once confirmed from operation attributions, will also guide policy and disaster mitigation efforts.