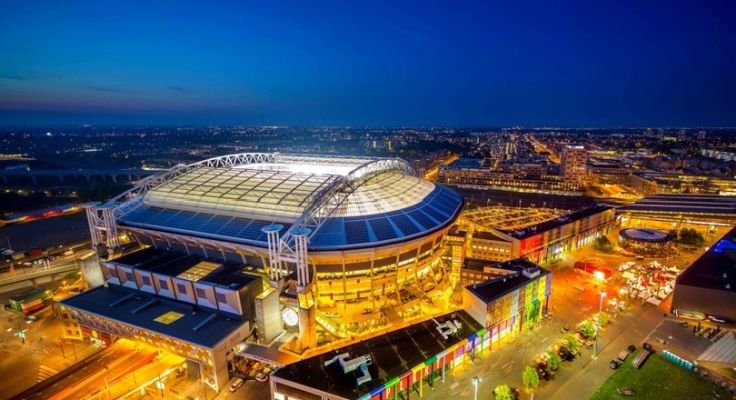 Johan Cruijff ArenA, the Europe’s largest energy storage system, is using second-life and new electric vehicle batteries in a commercial building. It became the site for the T3 inaugural Eco Award because of the fact that it not only uses solar power but also stores it on reclaimed Nissan LEAF batteries. This showcases a perfect mix of sustainability and recycling. It’s ingenious and ambitious, and a remarkable feat of engineering.

The system was switched on in June and was the result of a collaboration between Nissan, Eaton, BAM, The Mobility House and the Johan Cruijff ArenA, supported by the Amsterdam Climate and Energy Fund (AKEF) and Interreg.

The 3 MW, 2.8 MWh system provides a more reliable and efficient energy supply and usage for the stadium, its visitors, neighbours and the Dutch energy grid. The system’s capacity also means that the energy produced by the 4,200 solar panels on the roof of the ArenA can be stored and used optimally.

The stadium’s new energy storage system and related company, Amsterdam Energy ArenA BV, emerged from the innovation programme managed by Amsterdam Innovation Arena, in which knowledge institutions, governments and companies such as BAM, Nissan, Eaton and The Mobility House are working on the stadium of the future.