Bionic Bees To Assist Farmers in Plantation And Monitoring Pests 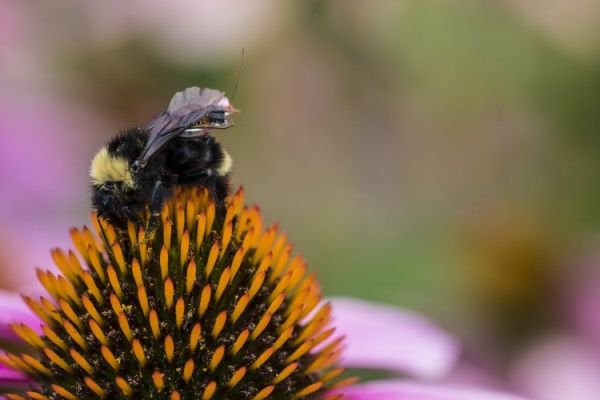 Farmers across the globe are now using drones to do everything from plant crops to monitor for pests.

But drones are energy-intensive — according to University of Washington (UW) researcher Shyam Gollakota, most can only fly for about 20 minutes before they need to recharge.

Gollakota and colleagues at UW think they’ve come up with a better alternative. They’ve created what they believe is the first sensor package that affixes to the back of a bumblebee — and it can collect data for upwards of seven hours.

Bumblebees typically weigh between 150 and 200 milligrams and can carry payloads equivalent to their own body weight and sometimes even heavier.

According to the UW team’s study, each of its sensor packages weighs 102 milligrams. More than two-thirds of that weight is from the system’s battery, which recharges wirelessly when the bionic bees return to the hive each night.

The rest is from a custom-designed localization system that records the bee’s position, along with several tiny sensors that monitor the temperature, humidity, and light intensity around the bee.

These sensors can collect up to 30 kilobytes of data, which the system uploads to a nearby access point after the bee returns to its hive at night.