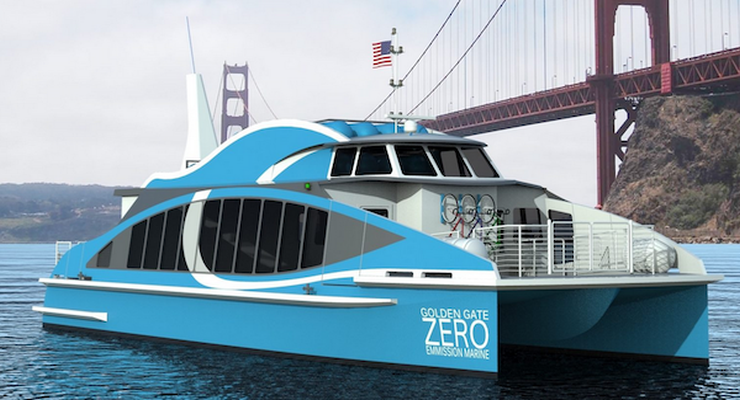 A futuristic new fuel cell ferry boat slated to ply the waters of San Francisco Bay, and the vessel is on track to launch — literally — next year according to its developer, Golden Gate Zero Emissions Marine.

The California Air Resources Board greenlighted the project as part of a $20 million cap-and-trade funding package aimed at reducing emissions in the off-road sector, for which water transport certainly qualifies.

Hydrogen fuel cells have been making inroads into the shipping and logistics fields, where the advantages of quick refueling and long range come into play.

Hydrogen fuel cell transportation, that’s a sustainability non-starter under current circumstances, in which hydrogen is sourced primarily from natural gas and coal gas.

How soon will that happen? The US Department of Energy has been bigly promoting renewable H2 with the help of private sector partners.

Among recent awardees is a Florida based company called Dioxide Materials, which is working on a low cost electrolyzer that eschews platinum and other precious metals.

If all goes according to plan, Water-Go-Round will be the first in a fleet of clean vessels aimed at meeting the zero emissions pledge of ferry and tour boat operator Red and White Fleet.