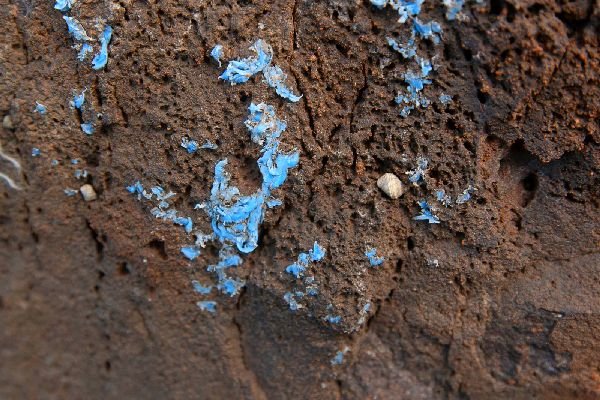 Researchers have identified a new, and perhaps more permanent type of plastic pollution, one that incorporates itself right into the rocky shoreline: “plasticrust,” a veneer of plastic encrusted right onto wave-licked rocks.

Ignacio Gestoso, a marine ecologist at the MARE-Marine and Environmental Research Center on the Portugese island of Madeira, first noticed the strange crusts on the volcanic island’s shoreline rocks in 2016. The light blue films were plastered onto the rock like old chewing gum grafted onto a sidewalk.

Early this year, they returned to the spot to find more area covered in the mysterious substance, now in multiple colors.

Chemical analysis of the stuff revealed that it was polyethylene, an extremely common plastic often used in single-use packaging and food containers. This has gone from a single sighting to covering nearly 10 percent of the rocks’ surfaces.

This “plasticrust,” phenomenon is a never-before-seen form of plastic pollution.

The crusts likely originated by the crash of large pieces of plastic against the rocky shore, resulting in plastic crusting the rock in a similar way algae or lichens do.

The team isn’t sure if the phenomenon is limited to Madeira or if it can be found elsewhere.

What they do know is that the plastic crust doesn’t appear to be a deterrent for at least one local species, a type of sea snail that seems content to eat the algae on top of the plastic.

This raises questions about whether the species is ingesting the plastic, too, well, this needs further investigation.