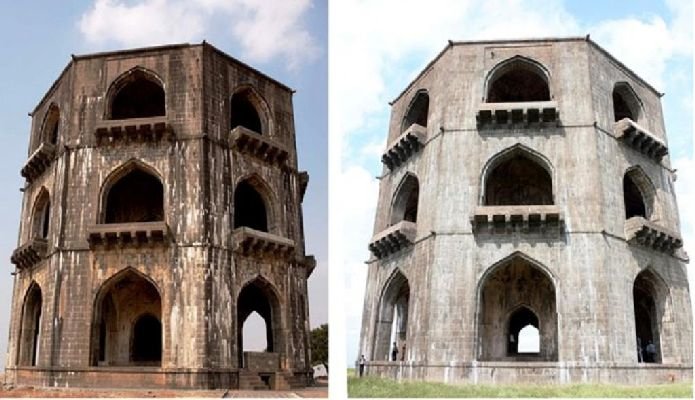 The Salabat Khan tomb, located 125 kilometres from Aurangabad in Maharashtra, has been losing its shine and beauty due to white deposits on its surface.

The tomb suffers from hard and difficult to remove precipitates of calcium carbonates induced by a leaching of lime due to rainwater and certain bacterial growth.

Manager Singh, a researcher from the Delhi-based National Museum Institute of History of Art, Conservation and Museology took samples and identified bacteria responsible for calcification and hardening of lime.

Singh said the organisms that have disfigured the Salabat Khan Tomb could be deployed to protect exteriors of other decaying monuments.

In Salabat tomb which is made up of black basalt stones, the bacteria led to development of white patches on the surface, but on monuments made of limestone or marble the same bacteria can be applied to prevent them from decay.

A spray of organisms identified along with calcium carbonate can create calcite layer that will help preserve exteriors of monuments.

In this method, micro-organisms are evenly sprayed on the surface and are fed with nutritional medium containing calcium and urea.

The bacteria then induce carbonate precipitation by creating low acidic medium and converting dissolved calcium into a protective surface coating of calcium carbonate.

A low acidic or alkaline medium is the primary source through which microorganisms promote this precipitation of calcium carbonate, also known as Biocoating.

The study is a step towards practically proving that living bacteria can be used to clean as well as protect old and historic monuments and also to seal the cracks, if any, without causing any damage to the monument or its surface.