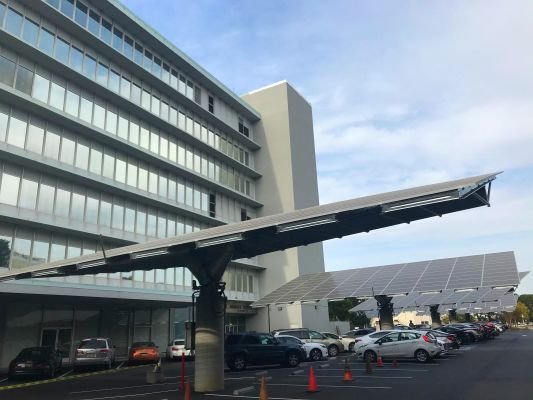 Burlingame, California, inaugurated a unique six-unit dual axis solar tracker car canopy at the Kahala Tower near the San Francisco Airport, on November 13. The commercial installation is being called the first of its kind in the United States because of the technology involved.

The carport features six Mechatron M18KD-20 trackers, the largest dual axis trackers available in the United States, with each tracker supporting up to 100 solar panels.

Because the tracker captures light earlier in the morning and in the early evening, it yields 45% to 60% more energy than a fixed-tilt solar array using the same number of solar panels, at a cost of about 50% less than fixed-tilt. The dual-axis design also out-performs single-axis trackers with a 20% energy boost.

The Mechatron array will provide a Levelized Cost of Energy at 7 cents per kWh, compared with an estimated LCOE of 24 cents for a fixed-tilt design. Because of its superior cost-benefit, the Mechatron tracker enables a Return on Investment of less than four years.

The total cost of this project utilizing Mechatron trackers was $368,000 compared to an equivalent carport canopy system at $733,300, a 49% capital investment reduction.

The overall energy savings of the Mechatron system, along with the Federal ITC 30% tax credit for solar installations, and with a 5-year MACRS accelerated asset depreciation, results in a 3.5 year ROI for the Kahala Carport investment compared with an average 7-9 year ROI for fixed-tilt canopies.