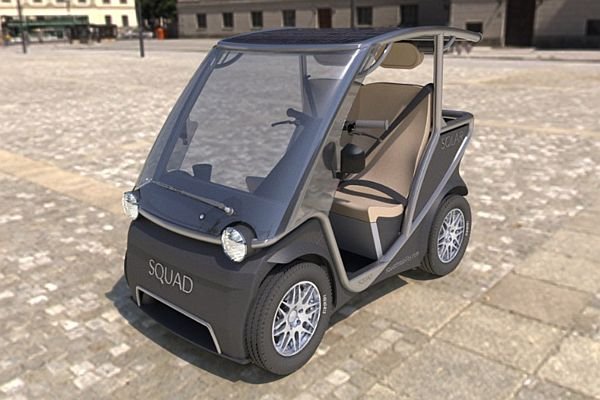 Squad Mobility is developing a new generation of urban solar electric vehicles, from Amsterdam, at truly affordable prices. And by affordable, they mean affordable, with a target retail price of €5,750 (ex. VAT) / $6,300 USD.

The new solar car has been dubbed the Squad, an imaginative amalgamation of solar and quad. The target price of the Squad is perhaps the biggest surprise as it launches, enabling millions of new customers to go electric.

It won’t come as a surprise if tomorrow a company decides to roll out thousands of Squad electric vehicles in cities, much like Bird and Lime are doing with scooters today, in a car sharing scheme with the possibility to transform the people of the world get around.

The roof of the Squad is covered in solar cells that produce enough power to provide a meaningful amount of power and range every day.

A solar-electric Squad can charge up to 9,000 km per year in a sunny country with its own solar roof, making it completely emission-free for most users driving circa 30 km or 1 hour per day for 300 days a year in an urban environment.

Initially, the Squad will be offered as a 45 km/h city car build, with an 80 km/h version planned for the future.

It is a simple urban people mover, with seating for two full-sized humans and a small storage compartment in the rear. A bench in the rear can seat 2 small children under 1.5 meters / 5 feet.

The Squad is slated to move into production in 2021 for the founding customers in its home market of the Netherlands, before spreading out to other countries in the EU.