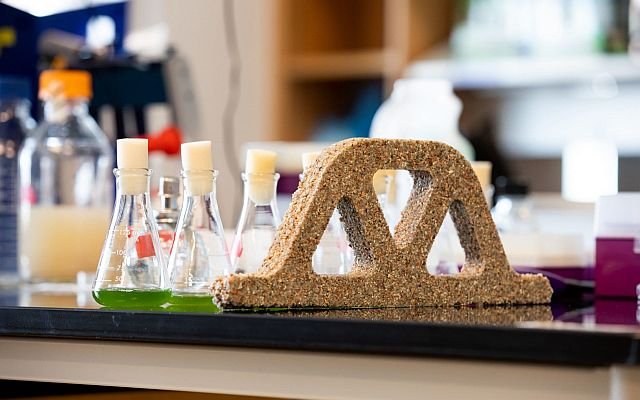 Scientists, at the University of Colorado Boulder in the US, have used bacteria to create a sustainable concrete that is alive, and can even reproduce, an advance that may help reduce the environmental impact of the construction industry.

Minerals in the new material are deposited by cyanobacteria, a common class of microbes that capture energy from sunlight through photosynthesis.

The researchers said their ability to keep the bacteria alive with a high success rate shows that living buildings might not be too far off in the future.

Such structures could, one day, heal their own cracks, suck up dangerous toxins from the air or even glow on command.

Making the cement and concrete alone needed for roads, bridges, skyscrapers, and other structures generate nearly 6 percent of the world’s annual emissions of greenhouse gas carbon dioxide, according to the researchers.

The team experimented with cyanobacteria belonging to the genus Synechococcus.

Under the right conditions, these green microbes absorb carbon dioxide gas to help them grow and make calcium carbonate — the main ingredient in limestone and cement.

To begin the manufacturing process, the researchers inoculate colonies of cyanobacteria into a solution of sand and gelatin.

With the right tweaks, the calcium carbonate churned out by the microbes mineralize the gelatin which binds together the sand, and the brick, they said.

Additionally, such bricks would remove carbon dioxide from the air, not pump it back out, the researchers said. The team discovered that under a range of humidity conditions, the bricks have about the same strength as the mortar used by contractors today.

The researchers also discovered that they could make their material reproduce. “Chop one of these bricks in half, and each of half is capable of growing into a new brick,” they said.

Topics: cyanobacteria living concrete sustainability
Previous Post Novameat’s Steak 2.0: The Most Realistic Plant Based Steak Till Date
Next Post New Rexi Hydropanels Are Of Half The Size, Yet Produce Same Liters Of Pure Water