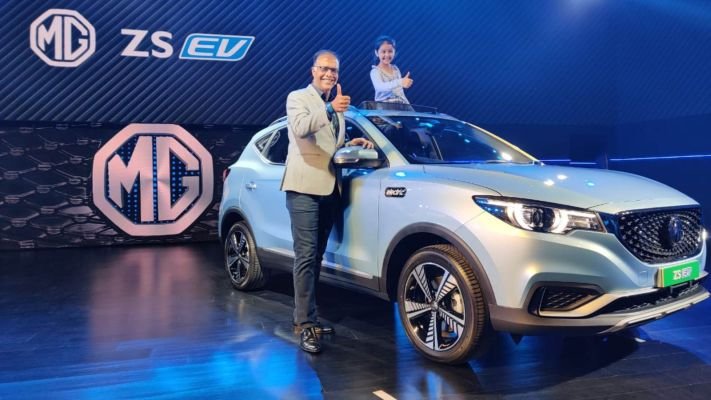 MG Motor India has unveiled the MG ZS EV in India. This is the first electric vehicle from the company’s stable and it certainly is a bold move.

We say that because, this is the second offering from MG Motor India and it’s an all electric SUV.

The ZS EV that comes to India is the same spec as the one sold in the UK but the company is assembling the electric car at its Halol plant in Gujarat. Because of this, expect the car to be priced aggressively.

The MG ZS EV is a compact SUV which is longer than the Hyundai Creta, but shorter than the MG Hector. As far as looks are concerned, it is more of a crossover than an SUV and it sports a wide chrome stud grille flanked by projector headlamps.

The cabin of the ZS EV looks neat and uncluttered with not much contouring on the dash and few buttons on the central console. But the fit and finish is pretty good. It comes with an 8-inch touchscreen system with Apple Carplay, Android Auto connectivity.

The company will provide a 7.4 kWh charger in all of the ZS EV cars. The battery-powered synchronous motor can develop 141 bhp and 353 Nm of peak torque and it will also get over-the-air (OTA) technology.

The ZS EV will be first launched in just 5 cities in India namely Delhi NCR, Hyderabad, Mumbai, Bengaluru and Ahmedabad.