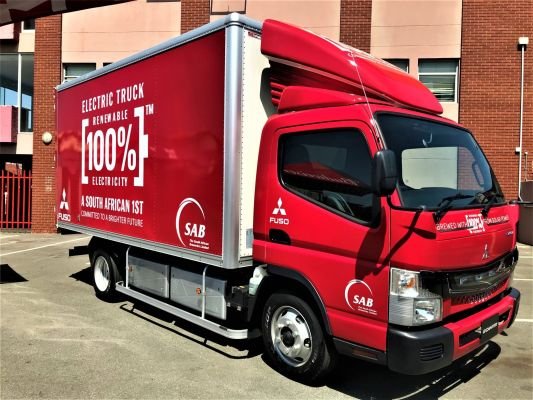 South African Breweries (SAB), part of the ABInBev family, launched its first electric commercial vehicle, named Mitsubishi Fuso eCanter, at its Chamdor Brewery in Krugersdorp on the 16th of January.

The unit economics definitely make sense. According to Mitsubishi, the eCanter offers savings of up to €1000 per 10,000 km on operational costs compared to an equivalent diesel truck.

Large fleet operators in Africa will benefit significantly by increasing the penetration of electric vehicles in their fleets.

The eCanter has six Mercedes-Benz liquid-cooled, high voltage, 13.8 kWh lithium-ion batteries that come together to make an 82.8 kWh pack that has a usable capacity of 66 kWh.

It’s great that it also comes with an actively cooled battery, especially in hot and sunny South Africa. This should assure users of excellent battery health in the long term.

It’s great to see large corporations with large fleets starting to adopt electric vehicles in this part of the world. We hope this will inspire a “Keeping up with the Joneses” phenomenon that will drive other corporations to transition to electric mobility on the African continent.