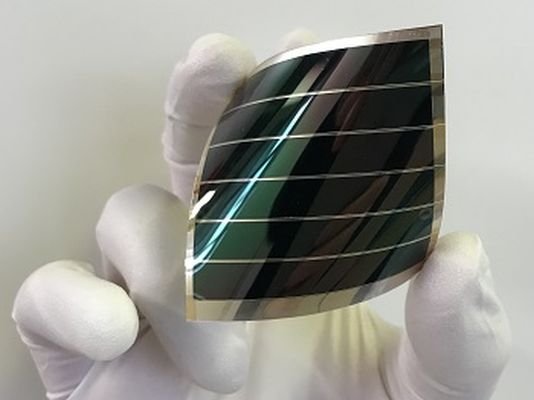 In a significant development, Toyobo Corporation Limited, along with the French government research institute, CEA, has come up with trial organic photovoltaics (OPV) small cells on a glass substrate along with high-level conversion efficiency in a dimly lit room.

During the trial, the OPV modules were placed on a lightweight and thin PET (polyethylene terephthalate) film substrate.

To put it simply, an OPV cell is a solar cell that has been coated by organic power-generating materials, including carbon and sulfur atoms on a glass piece or plastic substrate.

The cell can be shaped according to needs and can affix easily to walls or cloth surfaces where conventional solar cells are unsuitable for installing.

The future seems to be bright for this technology as there are high expectations for OPV as a wireless power source for wearable devices and the internet of things (IoT).

The company has been working on this material for quite some time and trying to achieve high power output from low illumination room light sources.

Over a time frame of six months Toyobo and CEA performed joint experiments using neon lighting with 22 lux, equivalent to the brightness of a dark room and the product was confirmed to have attained a cell efficiency of about 25%, nearly 60% higher than amorphous silicon solar cells commonly used for desktop calculators.

Toyobo plans to propose the use of this latest technology to solar cell manufacturers, and the company plans to launch the material by March 2023, mainly as a wireless power source for temperature humidity and motion sensors.