Electric Mustang Performs On Par With A Supercharged 5.2L Engine 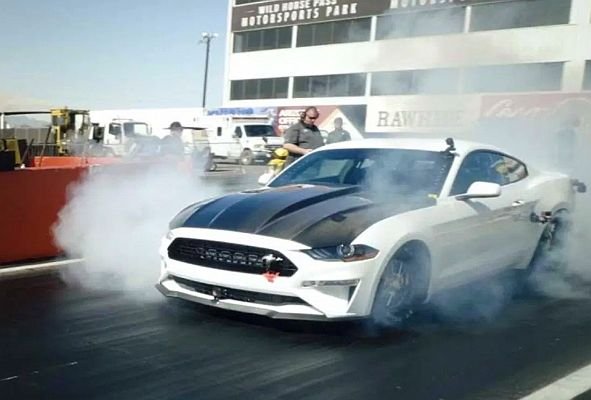 The Ford Mustang Cobra Jet 1,400 carries on with the Ford’s long tradition of drag racing the Mustang. But for the first time, a quiet electric power plant is spinning the slicks instead of a roaring V8.

This one-off prototype is said to hit mid-eight second quarter-mile times thanks to 1,400 HP and 1,100 ft.-lbs of torque.

That’s on par with numbers put up by Ford’s 2018 Cobra Jet equipped with a supercharged 5.2L engine.

The battery-powered Mustang Cobra Jet 1400 prototype is purpose-built and projected to deliver over 1,400 horsepower and over 1,100 ft.-lbs. of instant torque to demonstrate the capabilities of an electric powertrain in one of the most demanding race environments.

Ford says that the prototype is “projected to crush the quarter-mile in the low-8-second range at more than 170 mph.” The project serves as a test-bed and demonstration of Ford’s latest work with electric vehicles.

The latest iteration is an effort by Ford to honor the past, when the original Cobra Jet “dominated drag strips in the late 1960s and still is a major force in sportsman drag racing today. The project was a collaboration with MLe Racecars, Watson Engineering, AEM EV, and Cascadia.

This is a one-off demonstration prototype is designed to prove out Ford’s electric innovation. The dragster is built for Ford Performance, however the future of the vehicle has not been disclosed but even then this electric is a shot across the bow of Tesla and Porsche.