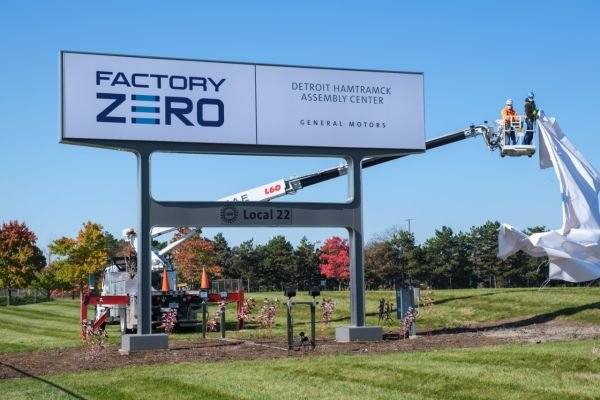 Reaffirming its continued commitment to a zero-crashes, zero-emissions, and zero-congestion future, General Motors today announced the rebranding of the Detroit-Hamtramck Assembly Center as Factory ZERO.

With a $2.2 billion investment, the plant is currently being reconfigured to an all-electric vehicle assembly plant.

GM produces the Chevrolet Bolt EV at the nearby Lake Orion factory — until recently, on the same assembly line as the Chevrolet Sonic. The Sonic has been discontinued and the available production capacity is expected to transition to the upcoming Bolt EUV crossover.

Beyond the Hummer by GMC SUT, which will be revealed on October 20, and the Cruise Origin, GM has shared no specifics of other BEVs to be produced at Factory ZERO.

Factory ZERO has been “taken down to the stubs” from its Hamtramck Assembly origin but final production of the GMC HUMMER EV is expected to begin in late 2021.

The plant would have an annual production capacity of 270,000 (the same as the former Hamtramck volume) and would produce multiple models through shared and modular production lines.

GM said that the Ultium battery cells would be produced at the Lordstown joint venture with LG Chem, which would then be assembled into modules and packs at Factory ZERO.

Factory ZERO is being transformed with sustainability in mind. During the plant’s physical transition, concrete waste was repurposed to create temporary roadways.

The site also recycled stormwater to reduce discharge costs and offset the cost of potable water. Treated stormwater will be used in cooling towers and the fire suppression system.

Recognized by the Wildlife Habitat Council, the site also features a 16.5-acre wildlife habitat and is home to species such as monarchs, foxes and turkeys.

Factory ZERO, represents the single largest investment in a plant in GM history. Once fully operational, the plant will create more than 2,200 good-paying U.S. manufacturing jobs.