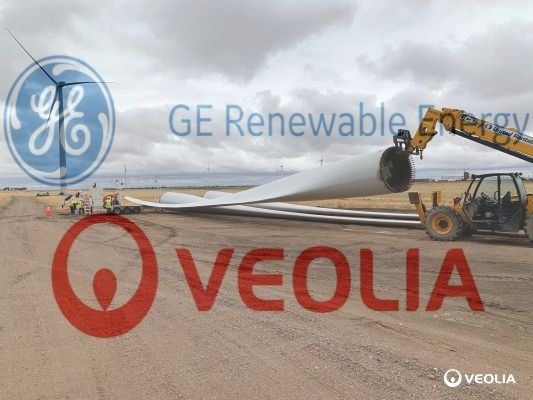 Veolia will recycle GE Renewable Energy old turbine blades by chopping them up and using them to make cement.

In a press release, the GE says it has signed a multi-year agreement with Veolia North America to recycle blades removed from its US-based onshore turbines during upgrades and repowering efforts.

It will use kiln reprocessing technology to turn the blades into raw material for cement.

Similar recycling techniques have been proven effective at a commercial scale in Europe.

As a part of the agreement, blades that have been removed from turbines will be shredded at Veolia’s processing facility in Missouri and then used as a replacement for coal, sand and clay at cement manufacturing facilities across the US.

On average, nearly 90% of the blade material, by weight, will be reused as a repurposed engineered material for cement production. More than 65% of the blade weight replaces raw materials that would otherwise be added to the kiln to create the cement, and about 28% of the blade weight provides energy for the chemical reaction that takes place in the kiln.

By adding wind turbine blades — which are primarily made of fiberglass — to replace raw materials for cement manufacturing, Veolia is reducing the amount of coal, sand and minerals that are needed to produce the cement, ultimately resulting in greener cement that can be used for a variety of products.