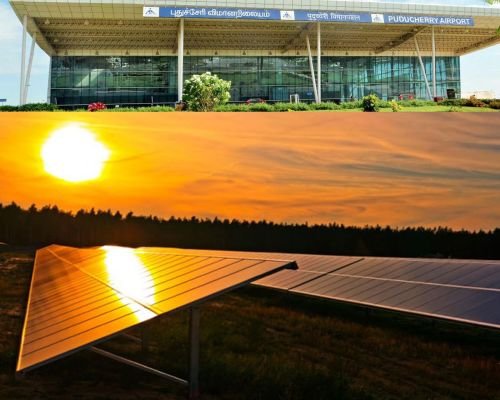 Puducherry airport has become the Airports Authority of India’s (AAI) first entirely solar-powered airport in the country with the commissioning of 500KWp ground-mounted solar power plant at a cost of Rs 2.8 crore.

The annual electrical energy consumption of the airport on an average is 0.72 million units. The solar power plant, which has 1,540 highly efficient polycrystalline solar PV panels, generates an average 2,000 units of energy per day.

The solar plant will meet the Puducherry airport’s day-to-day energy needs. The airport will save power bill of Rs 10 lakh per month plus will reduce carbon emission footprint by 6,570 metric tonne, which is equivalent to planting 32,850 trees.

The AAI had already begun the transition to renewable energy in southern regional airports with the installation of its first solar power plant of 750-KWp capacity at Kozhikode airport in 2016.

The total installed capacity of the solar power plants in the southern region is 5.526MWp, and the AAI proposes to enhance solar power capacity to 10.5MWp during the present financial year.