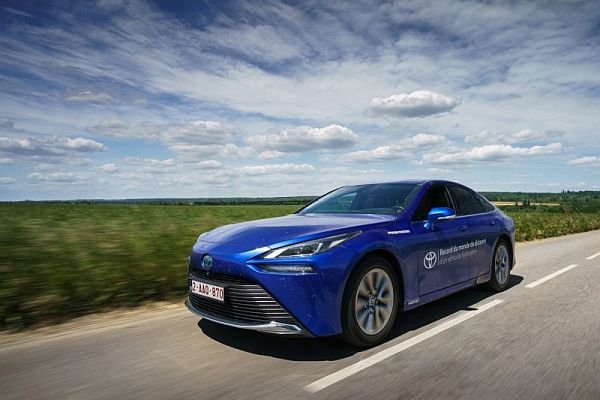 One of the most popular alternatives to electric vehicles is hydrogen powered vehicles and Toyota’s hydrogen (H2) car Mirai has broken the world record for the longest distance covered in a single charge by a hydrogen fuel cell car.

The journey began on the 26th of May, Wednesday, at 5:43 am. They started at the HYSETCO hydrogen station in Orly, France. On a single fill, they were able to complete 1003 km of driving.

Interestingly they achieved this feat on public roads of the Loir-et-Cher and Indre-et-Loire areas south of Paris.

An independent authority certified the distance and consumption of hydrogen. Toyota was able to achieve a consumption of just 0.55 kg/100 km. The capacity of the tank is around 5.6 kg.

Of course, the drivers used the eco-driving style. But they did not adopt any special techniques that everyday drivers cannot use. And the most amazing thing is that the vehicle was ready for more driving after just 5 minutes of refueling.

Hydrogen fuel cells emit only water, so there are no carbon dioxide emissions and no air pollutants that create smog and cause health problems at the point of operation. Also, fuel cells are quiet during operation as they have fewer moving parts.