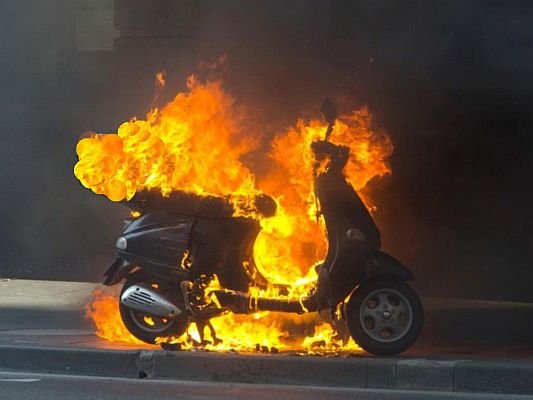 The electric vehicle story in India so far is largely being driven by startups. Pure EV is one of the many startups that have mushroomed in the country over the last two years. Incubated in IIT Hyderabad, Pure EV claimed it sold 25,000 electric vehicles over the past 18 months.

This time however the company is in the news for wrong reason; after two videos surfaced showing its two electric scooters on fire in Hyderabad.

Viewed over 2,800 times, the clip begins with immense smoke and fumes erupting from a scooter parked on the side of a road. Towards the end of the video, the vehicle catches fire as people run away from it. The vehicle in blue color is identified as ePluto built by Pure EV.

With a significantly lower number of moving parts, EVs are relatively simpler to produce. Yet, the battery that is at the heart of the vehicle is a complex thing.

Safety of the vehicles depends on how efficient the battery management system is, how well the battery is cooled and how good the insulation of the pack itself is from outside elements.

At the same time, the lithium ion cells themselves are not manufactured in the country and imported mostly from China. Industry sources say that is where most of the grey areas exist.

It can be life-threatening if the battery of an electric vehicle explodes. Battery related safety hazards aren’t unheard of in the global EV industry. They are, in fact, becoming more frequent with the rise in volumes and increase in demand.

For now, the incident of fire has certainly left people scared on social media and made the industry nervous.

Topics: battery fires electric vehicles ePluto pure ev
Previous Post Volvo Is Gearing Up For A Fully Circular Business By 2040
Next Post Flipkart Is Deploying 2000 EVs And Is Going Plastic-Free From This Festive Season