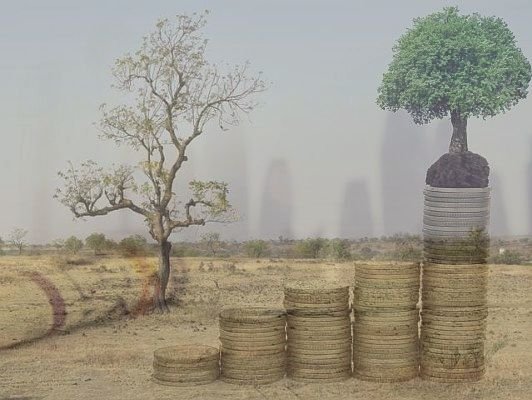 Ladkhan Nayagaon is a village located along National Highway 15 in Rajasthan’s Bikaner district. On one side of the road, a dense grove of trees obscures what lies behind it.

According to government records, the land behind the trees was set aside for “compensatory afforestation” – specifically, the Rajasthan forest department is supposed to have planted trees here to offset tree felling for development projects elsewhere.

Trees were supposed to have been planted on a four-hectare patch here at a cost of Rs 5.23 lakh to compensate for forest lost due to the construction of an electricity transmission line.

The team discovered a largely barren expanse pockmarked with pits about four or five feet deep – evidence of sand mining – during a recent visit in December 2021. There were patches of an invasive shrub visible, but no trees, much less an entire forested patch.

The lost forestland was an apt metaphor for the Indian state’s compensatory afforestation program. For over two decades, the environment ministry has promoted this afforestation as a way to offset forest loss due to development activity.

Our examination of 2,000 files uploaded to e-Green Watch, the ministry’s website for afforestation projects, revealed several instances of no evidence of plantation activity.

In the more bizarre cases, allegedly forested land corresponded to implausible map locations, such as the middle of the Arabian Sea.

However, in the two decades since the concept was first proposed, compensatory afforestation has been a complete failure. Ladkhan Nayagaon, where supposedly forested land has become barren, is not an outlier, as the research data above demonstrate.

The data on incorrect or missing plantations suggests that this issue warrants further examination, especially given the amount of money spent on compensatory afforestation.