Amazing – Tesla Fire Rekindled After 3 Weeks In A Junkyard 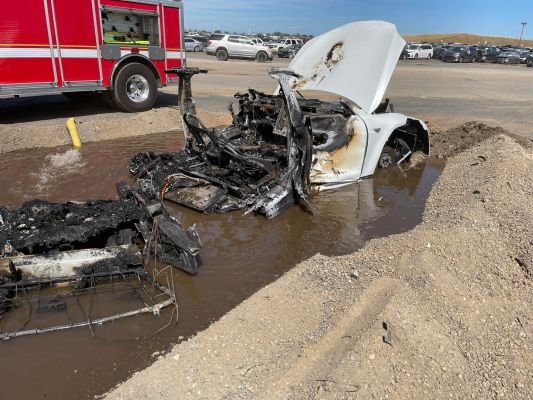 This fire was a first for Sacramento’s fire department, and it was a perplexing first, because water alone couldn’t put out the battery fire, and the car had been lying in a junkyard for three weeks, which would leave a typical gas-powered vehicle completely useless.

The Sacramento Metro Fire District claimed in a tweet that the Tesla car was sitting in a junkyard when they were called to the site, and that while the department’s crews “knocked the fire out,” it kept rekindling even when they directly penetrated the battery compartment on its undercarriage, the vehicle would still re-ignite due to the residual heat.

The fire was ultimately put out after firefighters and junkyard employees “built a tiny trench, placed the car within it, and filled the pit with water,” submerging the battery compartment.

While we don’t know what year or model the Tesla in the Sacramento junkyard fire was, it’s still concerning that this is still happening two years after it was revealed that the company knowingly sold cars with flammable batteries — and a bad omen for the future of the electric cars, which occasionally explode for no apparent reason.