Supertanker Utilizes 130-Foot Sails To Save 9.8% Of Its Fuel 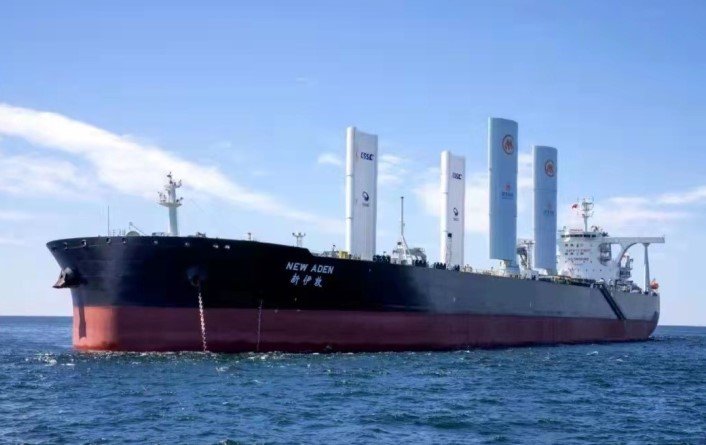 The China Merchant Energy Shipping company’s latest crude oil supertanker uses four big sails to cut fuel usage. The four 130-foot masts reduced the supertanker’s fuel usage by an amazing 9.8 percent, according to the business, showing once and for all that depending on powerful wind currents to travel our planet’s oceans still makes sense in the twenty-first century.

The giant supertanker does not resemble traditional sailing ships. The ship, called “New Aden,” is more than 1,000 feet long and contains four lightweight carbon fiber composite blades that can be electrically lifted or lowered.

These lightweight, corrosion-resistant carbon fiber composite blades may be raised and lowered with the push of a button. An “Aerofoil Sails Intelligent Control” system is meant to constantly analyze prevailing circumstances as well as navigation data and alter the angle of the sails to make the most use of available wind.

This system isn’t intended to be the major driver because it is a rather minor implementation of the auto-sailing notion. The ship will continue to consume a large amount of fuel. However, on an example shipping route between the Middle East and the Far East, it is predicted to lower average fuel usage by more than 9.8%, saving an estimated 2,900 tonnes of CO2 emissions every voyage.

The New Aden is a crude oil supertanker, and it is still built to transport around two million barrels of ecologically hazardous fossil fuels. But this is, at the very least, a start in the right direction.