Amazing – SkyDrive Is Flying Car With Person Aboard 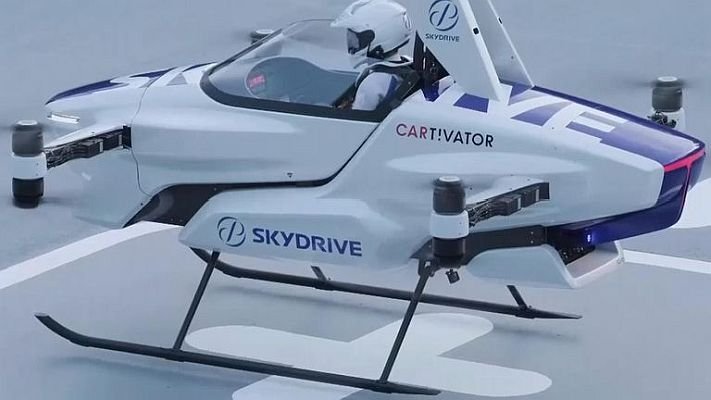 Japan’s SkyDrive Inc., among the myriads of “flying car” projects around the world, has carried out a successful though modest test flight with one person aboard.

The vehicle looked like a slick motorcycle with propellers lifted several feet (1-2 meters) off the ground, and hovered in a netted area for four minutes.

The machine so far can fly for just five to 10 minutes but if that can become 30 minutes, it will have more potential, including exports to places like China

While it sounds like a small feat, very few eVTOL (electric vertical takeoff and landing) projects have ever actually made it off the ground — and fewer yet have done so with a human in the pilot’s seat.

Unlike airplanes and helicopters, eVTOL vehicles offer quick point-to-point personal travel, at least in principle. They could do away with the hassle of airports and traffic jams and the cost of hiring pilots, they could fly automatically.

SkyDrive hopes that “the flying car” can be made into a real-life product by 2023, but making them safe is critical and first priority. Of the world’s more than 100 flying car projects, only a handful have succeeded with a person on board.

Battery sizes, air traffic control and other infrastructure issues are among the many other potential challenges to commercializing them.

A demonstration flight three years ago went poorly. But it has improved and the project recently received another round of funding, of 3.9 billion yen ($37 million), including from the Development Bank of Japan.

Experts compare the buzz over flying cars to the days when the aviation industry got started with the Wright Brothers and the auto industry with the Ford Model T.