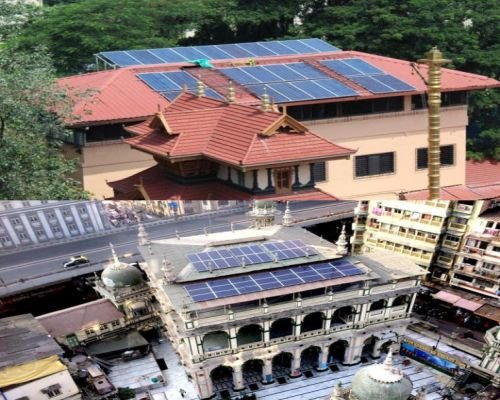 The 200-year-old Shree Siddhivinayak Ganapati temple at Prabhadevi has been saving Rs40,000 a month for the past four years. A 20 kilowatt-hour (Kwh) solar rooftop project, comprising 72 panels spread across 3,000 sqft, atop their five-floored Prathisthalaya temple building is used to power lights and fans on every floor, reducing their dependency on the grid

Minara Masjid in south Mumbai has been saving half its electricity bill, owing to a 15 Kwh rooftop solar setup in installed in January. With 46 solar panels, the setup generates 45 kWh to 70 kWh solar power a day

St John the Baptist Church at Thane installed a rooftop solar system with nine panels. The system powers lights and fans and has reduced its electricity bill by 40%

Shri Krishna Pranami Mandir in Bhuleshwar installed an 8.5 kWp rooftop solar facility with 27 panels, which can generate 13,500 units a year and 35 to 45 units daily depending on the season. The temple saves Rs1.45 lakh a year

Shree Ayyappa temple which was founded in 1989 in Vartak Nagar is the first shrine in Thane, Mumbai to tap the sun for its energy needs. Spread across 6,000 square metres, the temple, , installed a 41-panel rooftop solar power plant across 110 sq m last week. Avishakti Rooftop Solar Pvt Ltd, installed the solar plant.

The plant generates 19,700 kilowatts an hour (kWh) of electricity annually or 54kWh electricity daily. With a capacity of 12.71 kilowatt power (kWp), the plant can supply all the electricity the temple needs in a year. The temple’s lights, fans, air conditioners, and water pump function on solar energy. The temple expects to save Rs2.60 lakh a year, said members of the temple trust.