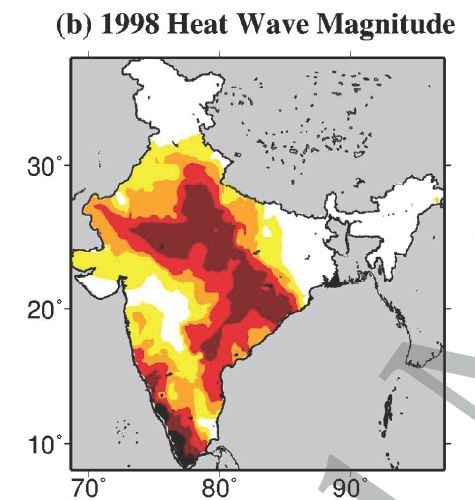 Heatwaves in India are projected to become more frequent during the current century under different climate change scenarios, a new study has concluded.

Even if the global mean temperature is limited to 2 degrees above pre-industrial conditions – as being targeted under global climate change negotiations – the frequency of severe heatwaves will rise by 8 times in the middle of the century (2021–2050), and 30-times the current level by the end of the century.

Under the 2 degree temperature rise scenario, population exposure to severe heatwaves is projected to increase by about 15 and 92-times the current level by the mid and end -21st century respectively, according to the study led by scientists at Water and Climate Lab of the Indian Institute of Technology, Gandhinagar.

The increasing trend of heatwaves in India is already visible. Data shows that there has been a substantial increase in the frequency of heatwaves during the period of 1951-2015. Based on the heatwave magnitude (an indicator of heatwave severity), the five most severe heatwaves out of the top ten heatwaves in the entire record (1951-2015) have occurred after 1990 – in 1995, 1998 and 2012.

Researchers said strategies to reduce population growth in India during the century may provide only limited mitigation of heatwave exposure mostly late in the century. “Limiting global temperatures to 1.5 degree above preindustrial levels would reduce the exposure by half relative to Representative Concentration Pathway (RCP8.5) by the mid-21st century. If global temperatures are to exceed 1.5 degree then substantial measures will be required to offset the large increase in exposure to severe heatwaves in India,” the study said.

Heatwaves have a direct impact on human health, even causing large scale mortality. If global temperatures are to reach 2 degree threshold, these impacts will exacerbate unless measures are taken to reduce exposure to heat. Such steps will include modification of land cover, construction of shelters, promoting use of passive and active cooling systems, modification in daily behavioural patterns, and development of emergency public services. “India currently has a low penetration of air conditioning; increased penetration could substantially reduce exposure for many people, though not for those who labour outdoors,” the study notes.

“Extremely hot days and heatwaves have become more frequent in India during recent years. The 2015 heatwave caused over 2000 deaths. The heatwaves that can have a large mortality are projected to become common in the coming decades. More alarming is that even if we mitigate the climate change and limit global warming to below two degrees, severe heatwaves are projected to occur every year,” explained Dr Vimal Mishra of IIT Gandhinagar, who led the study.

“We find the not only these severe heatwaves will become more frequent but they will cover the large area of the country in coming decades, which will result in a significant number of people getting exposed to it. The only way we can reduce the negative impacts is to reduce greenhouse gases emissions otherwise the cost of adaptation (in terms of healthcare, cooling systems, energy demands) can be enormous,” added.

The study is based on past temperature data from the India Meteorological Department (IMD), while projections about future changes are based on gridded observed data of maximum air temperature as well as simulations from global climate models.