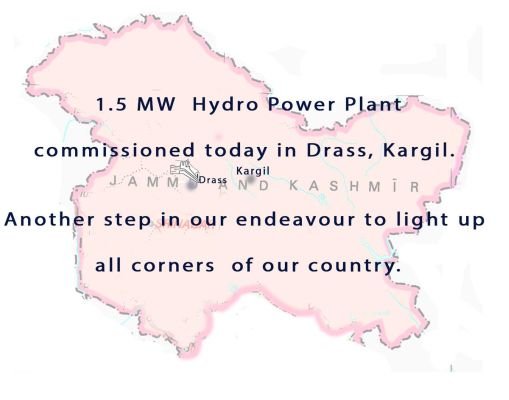 The Biaras Small Hydro Power Project (SHP) of 1.5 MW capacity, in Biaras Drass, Kargil Jammu & Kashmir, was commissioned on 4th November 2017. The total cost of the project, fully funded by the Ministry of New & Renewable Energy, is Rs. 17 crores and this is the first project to be commissioned under the Prime Minister’s Ladakh Renewable Energy Initiative (LREI).

The plant will power the Drass town in Kargil, which is one of the coldest places in India. Power from Biaras SHP would be sufficient to meet normal power requirement of about 1000 families, which would make them comfortable in the extreme winter season. The project has been developed by Kargil Renewable Energy Development Agency (KREDA) under Ladakh Autonomous Hill Development Council.