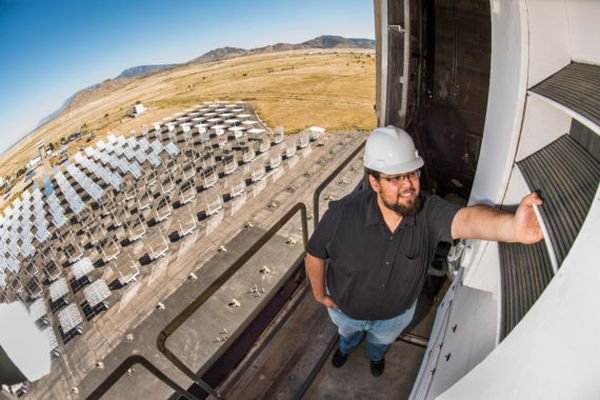 Solar power is not a “one size fits all” proposition. What works for one part of the world may not work for another. India is a case in point. Rooftop solar power has been a challenge given India’s urban densities and inadequate roofs. Concentrated solar power plants could help meet India’s renewable energy goals, but most CSP plants are too large to fit conveniently on the land available.

Researchers at Sandia National Labs have figured out how to downsize CSP facilities so that they are economically viable without taking up as much space as traditional solar panel arrays. Much of rural India is powered by diesel generators, which cost a lot to install and operate. While small-scale CSP might be too expensive in some areas of the world, it could be just right for India.

The key to downsizing CSP facilities is making the solar energy absorbers that capture sunlight and redirect it to a central tower more efficient. That solar energy is then concentrated and used to heat a fluid or a gas that can be stored and used later to turn a generator. Experimenting with different designs for the solar receivers is a tedious, costly, and time consuming process. That’s where 3D printing comes in.

The researchers, led by engineer Cliff Ho, have pioneered the use of an additive manufacturing technique called powder-bed fusion to print their small-scale receiver designs from Iconel 718, a high-temperature nickel alloy. Ho says this 3D printing provides a cost effective way to create a small number of different fractal designs. Some of the designs tested are as much as 20% more efficient than conventional solar receivers.

In the future, production using 3D printing could be expanded to meet the needs of real-world CSP facilities. Previous attempts to boost the efficiency of the solar receivers focused on special coatings, but they proved to have a relatively short lifespan and need frequent and expensive replacement.

“Additive manufacturing enabled us to generate complex geometries for the receiver tubes in a small-scale prototype,” Ho says. “Fabricating these complex geometries using traditional methods such as extrusion, casting, or welding would have been difficult.”

Traditional designs use a flat panel design of tubes. “When light is reflected off of a flat surface, it’s gone,” said Ho. “On a flat receiver design, 5 percent or more of the concentrated sunlight reflects away. So we configured the panels of tubes in a radial or louvered pattern that traps the light at different scales. We wanted the light to reflect, and then reflect again toward the interior of the receiver and get absorbed, sort of like the walls of a sound-proof room.”

The objective of the research at Sandia Labs is to create small-scale CSP facilities of 1 megawatt or less that will be appropriate for use by small rural communities. The research is part of a Laboratory Directed Research and Development project conducted by the Solar Energy Research Institute for India and the United States. SERIIUS is a joint endeavor of the Indian Institute of Science and the National Renewable Energy. It is funded by the US Department of Energy and the government of India.