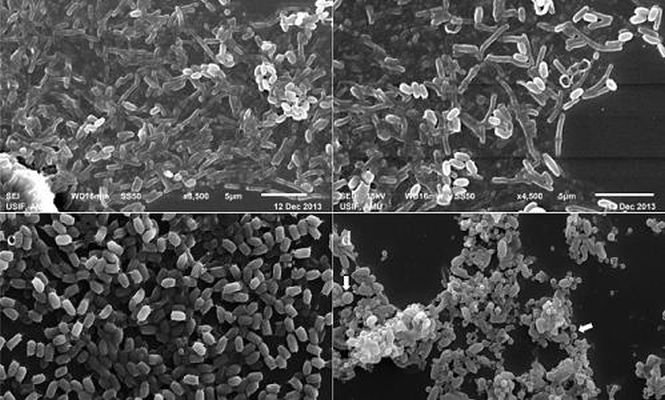 Soil bacteria, Bacillus thuringiensis or Bt, became famous for its connection with genetically modified crops like Bt cotton and Bt brinjal. But it has its use in agriculture beyond GM crops. A group of Indian scientists have found new strains of Bt which they say can be used to develop biopesticides in future.

Bt is an important soil organism which produces protein crystals toxic to many insects. These proteins become active in the gut of pests under alkaline conditions and form pores in their cell lining. Subsequently, insects lose their cellular constituents, stop feeding and ultimately die. GM crops exploit these traits by incorporating such bacterial genes. However, over a period of time pests become resistant to toxic genes. Crystal proteins of Bt can be added directly to soil instead of chemical pesticides, but in this case too their prolonged use may allow pest to develop resistance.

Therefore, scientists are on a lookout for different strains of bacteria that contain unique insecticidal genes. In their search for a novel strain of Bt, researchers focused on Northwestern Himalayas. They gathered 207 soil samples from ten different locations and cultured the bacteria in lab. The crystal proteins produced were then tested for toxicity against cotton bollworm.

Two proteins – Cry and Cyt- have the strongest insecticidal action against this moth. So, scientists checked bacterial DNA for the presence of seven different classes of Cry genes and two classes of Cyt genes. Almost two-thirds of the Bt strains tested positive for either gene. Researchers then isolated bacterial proteins and fed them to the cotton bollworm larva. Eating leaves coated with these proteins stopped larval feeding in 30% of cases. Scientists noticed that strains most successful in this endeavour expressed both Cry and Cyt genes.

Based on these results, four potential strains that can be used to develop broad range biopesticides have been identified. One that particularly stands out isBacillus thuringiensis JK 12 which is required in the least quantity to stop larval feeding.“In future, all these four potentially toxic strains shall be tested against other lepidopteran pests and we will determine their applicability as broad-host-range biopesticides”, Showkat Ahmad Lone, the lead author of the study, told India Science Wire.

However, Dr. Raj K Bhatnagar, Professor Emeritus at International Centre for Genetic Engineering and Biotechnology, who is not connected with the study, pointed out that such studies fall short on characterising the gene or the protein. “In the present study, there is no comparison of toxicity with known strains,” he added.

Because these proteins are non-toxic to humans and do not affect soil productivity they offer several advantages over conventional pesticides, Dr Bhatnaghar felt.