Weeds to Increase with Climate Change 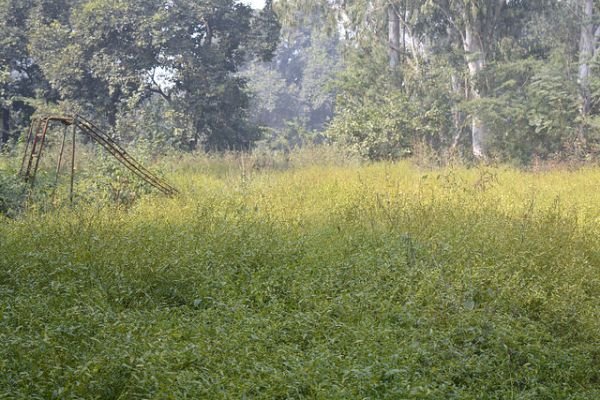 Weeds are a persistent problem for farmers. A recent assessment by the Directorate of Weed Research shows that India loses crops worth $ 11 billion every year to these farm intruders.

This study, published in the journal Crop Protection, was carried out on 14 major crops and utilised data from 1581 on-farm research trials covering various districts of 18 states in the country. The study evaluated yield losses in three types of field plots–plots where weeds are left uncontrolled; where weeds are managed by manual or mechanical weeding practice and plots where weed control was done by both manual weeding and herbicide application.

The problem is projected to further aggravate with climate change as weeds can better adapt to temperature fluctuations than crop plants. Weeds, unlike crop plants, are sturdy and can grow in a wide range of climatic conditions and soil types. They produce an astounding number of seeds which are often light in weight and are carried by wind to near and far away destinations helping them to readily colonise a barren land or an already established field. Weeds are not only ecology destroyers but are a serious health hazard, too.

“In a climate change scenario, there will be difficulty in terms of untimely rains, hardy temperature conditions, and extremes of weather. In any case, weeds are hardier than crop plants, as while humans breed crops, nature breeds weeds. So, weeds will be more tolerant to any climate aberrations,” explained Kapila S. Rathore, senior scientist at the Indian Agricultural Research Institute.

While farmers use herbicides–chemicals to eliminate weeds–research suggests that the rise in the temperature can increase volatility of herbicides rendering them ineffective to act and kill the weeds. Adding to the plight of farmers is the problem of resistance caused by extended and overuse of herbicides.

Parthenium, which is popularly believed to have reached India along with wheat import during the famine of 1950s has not only covered roadsides and fields but also led to allergies in humans. Likewise, water hyacinth competes with marine organisms for nutrients and light and is a serious threat to the fishery industry.

Weed control is particularly difficult as the strategies which intend to kill weeds also harm crop plants. Traditionally famers have used manual pulling or with tools like weeders. However, manual pulling is increasingly getting replaced with other techniques, mainly due to high labour costs. Currently, most farmers do manual weeding in combination with herbicide application to overcome the weed menace.

Asia Pacific Forest Invasive Species Network (APFISN), which is a cooperative alliance of the 33 member countries in the Asia-Pacific Forestry Commission, a statutory body of the United Nation’s Food and Agriculture Organisation, lays stress on practices such as use of weed-free certified seeds, ensuring clean harvesting equipment and application of pre-sowing herbicides in the field to prevent weed germination. Scientists advocate that land should not be left uncovered and that plants like Dhaincha, which also act as green manure, be grown in between two seasons and in between the crop rows to prevent emergence of weeds.

Studies have shown that agricultural practices such as growing dissimilar crops together (intercropping) or one after the other (crop rotation) help by disrupting the adaptation of weeds to a particular crop and field. Further, early and high-density sowing, narrow row width and use of cultivars that grow rapidly and cover the land have been shown to help suppress weed growth. A study reported in Indian Journal of Weed Science shows that a combination of early sowing of quicker growing wheat varieties significantly smothered a major weed, Phalaris minor.

Another potential solution is use of bio-herbicides–herbicides based or derived from plants, fungi, bacteria, viruses, protozoa, and nematodes. They promise to specifically kill the weed without causing harm to humans and environment. One of the success stories of biological control was seen in Khairi village of Madhya Pradesh where Mexican beetle was released to eliminate gajar ghaas. In a similar attempt, exotic weevils which specifically eat leaves and petioles of water hyacinth were left in a pond. This experiment was also successful.

Several plants such as barley, rye, annual ryegrass, buckwheat, oats, sorghum, sudan sorghum hybrids, alfalfa, wheat, red clover, and sunflower have been found to display allelopathy–a process where they exudate a chemical in soil that does not allow any other plant to grow near them. They can also be used to suppress weed growth. Also, the aqueous extracts from several plants such as cogongrass, sacrificial grass, Kleberg bluestem, and Johnson grass suppress the growth of weeds. Currently, 17 mycoherbicides—herbicides based on fungus—have been registered across the globe.

However, not many bio-herbicides are being deployed. “Bio-herbicides are advantageous as they do not have any residue like chemicals. They are target specific and generally are end-user friendly,” pointed out Dr Sanjai Saxena, professor at Thapar University, Patiala who holds a patent for bio-herbicide for Lantana camara, parthenium and water hyacinth. In India, however, hardly any bio-herbicide has been deployed, he said.

Research focused on better understanding of biology and weed ecology can help in devising strategies for their removal. Further, identification and use of crop cultivars which are early sowing, or exhibit allelopathy can tackle the problem. It is also a need of the hour to identify or develop herbicide tolerant crops to reduce the herbicide pollution. The potential of application of eco-friendly bio-herbicides to evade the weed issue also needs to be examined.

Experts also stressed the need to educate and communicate to the farmers about sustainable agriculture practices as well as methods for weed removal like increasing crop density, practising crop rotation and intercropping. “Farmers are aware of the presence of parthenium but do not know about its poisonous nature. We do hold awareness campaigns on effective management of this weed, but our outreach is limited as no special fund is allotted for this programme,” commented Dr Debasis Mishra, senior scientist at Krishi Vigyan Kendra in Odisha.