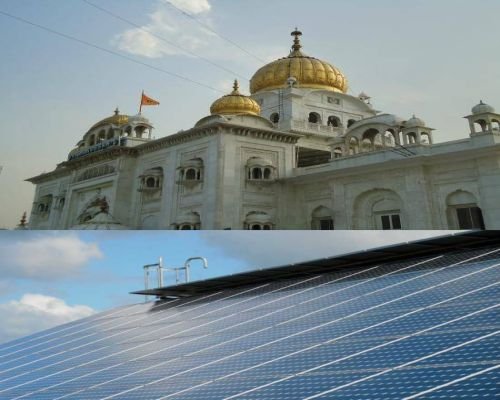 The Capital’s historic Gurdwaras are set to go green in day-to-day functions by tapping solar energy.

The renewal energy wing of Delhi Sikh Gurdwara Management Committee (DSGMC) has initiated one MW solar energy project, which will be commissioned by 31st March.

The foundation stone laying ceremony (Ardas ) of the first such projects in the shrines will be performed at Gurdwara Bangla Sahib by next week. Initially, Gurudwaras—-Bangla Sahib, Rakbganj, Nanak Piao and Majnu-ka-Tilla-=—will be included to provide one MW solar energy and all the rooftop solar plants will be commissioned by March-end.

The 1 MW solar power project will lessen 1,300 tonnes of CO2 emissions per year. Over 25 years, it will reduce 30,000 metric tonnes of carbon dioxide emissions in the environment.

The installation of 1 MW (photovoltaic) systems will be the largest across Delhi Gurdwaras. This system will replace parts of the grid power provided by the New Delhi Municipal Council and discoms by electricity generators with clean solar energy.

The project is being commissioned by M/s SAEL. They will be installing around 3,125 solar panels on rooftops of the Gurdwaras to tap cheap and clean power.

Power purchase agreement has been signed and the DSGMC is likely to save approximately Rs 60 lakh every year, once the project is commissioned.