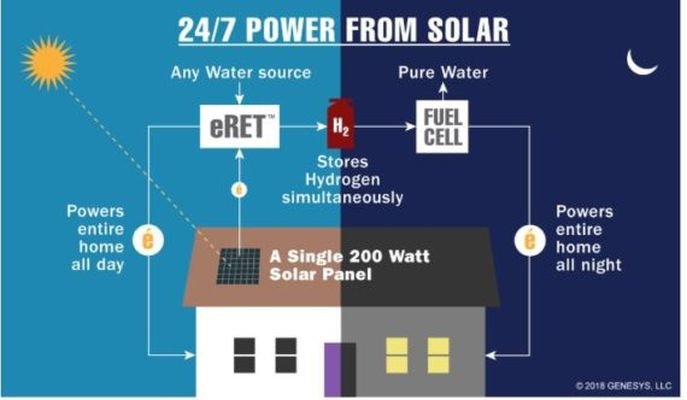 Genesys, LLC announced that it has received a US Patent for a solar amplifier. It is reported to be able to generate very high electrical power in the multiple kilowatt range and run for 24/7 service using only one standard solar panel (200W).

Is this a game changer for the solar generation industry?

Electrical Radiant Energy Transfer (eRET™) system captures the sun’s photons and stores them as high voltage electrons, so that large quantities of electrical power can be generated on demand. The eRET employs its high speed, extremely low resistance, high energy electron current using a cascade process rather than the induction process commonly used to generate an electric current in copper wires.

The anticipated first commercial product will be able to produce 20KW of power, 24 hours a day, using only one standard 200-watt solar panel. At night, a small hydrogen fuel cell is employed to power the eRET’s power supply, which delivers the high potential energy to the eRET’s super convective current generator.

The eRET power supply needs less than 100 watts to operate, alleviating the need for using and storing large volumes of hydrogen.

A typical home will require less than 50 grams of hydrogen to run at night, and a metal hydride storage system is part of the eRET to store the hydrogen for night time use. The volume of the metal hydride container system is approximately the size of three one-liter sized soda bottles.

The system should be able to generate direct current (DC) or alternating current (AC) without the need for an inverter. The entire system is about the size of a large microwave oven.

The price of a 24/7 eRET single power system in large scale production is forecast to be in the range of a standard house furnace system. The eRET system has the potential to be a much cheaper, eco-friendly, long-term alternative to grid based technologies for the average consumer.