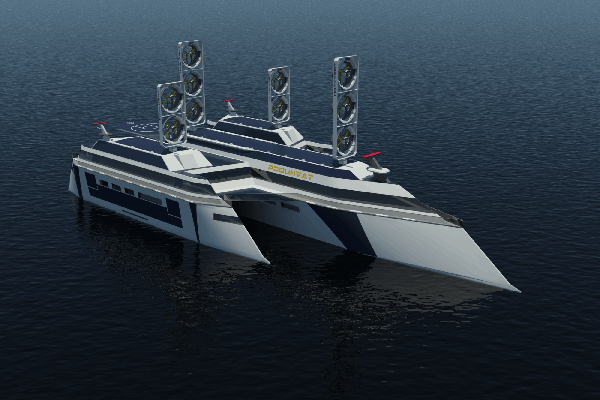 TRIVAL is the first generation of renewably powered ship that can travel around the globe without any need to stop to port to refuel or to resupply. It has been envisioned as a scientific cruiser with speed of a yacht and utilization of research facility.

It is powered by wind and sun. TRIVAL power source consist of four VETROsails with total of ten VETAR 15 advanced wind turbines with joint power of 150 kW per hour. In addition to wind energy it has another 150 kW of solar power distributed throughout and at top of the ship.

With 30 MWh of power storage, 6000 kW propulsion system and maximum of 300 kW of power generation, TRIVAL can travel at speeds beyond 50 knots – well above any sail ship, or traverse distances around the globe well beyond any traditional fossil fuel powered sea vessel.

TRIVAL utilizes state of the art hybrid wind+sun renewable energy systems.  Wind energy is distributed through 4 retractable VETROsails where two central sails contain three VETAR 15 wind turbines each, while two lateral contain two VETAR 15 turbines each, in all totaling 150 kW of installed wind energy.This is not possible by using conventional wind turbines of same power output as they are too large.

It is important to know that at the sea winds are much stronger and more sustained than winds at the land with global average wind velocity above ocean beeing around 8 m/s at 10 m height which is double of that on land.

Solar energy is implemented through efficient thin film solar panels that are lightweight and give better power production in shady and cloudy environment than traditional PV. Solar are mostly spread at the top of the ship to have the best exposure from to sun.