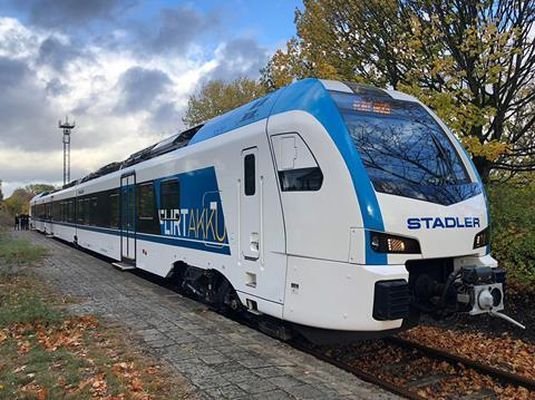 Zero emission hydrogen-powered locomotives are edging onto the tracks in Europe and Asia, and now California is getting into the act.

The new “FLIRT H2” train will be built by the Swiss-based firm Stadler for the San Bernardino County Transportation Authority. It is destined for a new rail service called the Arrow, a nine-mile connector currently under construction. When completed, the Arrow will link Redlands to the San Bernardino Transit Center.

The Arrow is scheduled to start operation in 2022. The FLIRT contract calls for the new hydrogen train delivered to be delivered by 2024. If everyone is happy with the first one, San Bernardino County has the option to buy four more.

The new locomotive will mark the return of electric rail transportation to Redlands for the first time since 1937, when the Pacific Electric Red Car trolley system went out of service.

Meanwhile, the plan is for the Arrow to use trains equipped with a relatively recent development in locomotive technology called Diesel Multiple Units.

The project would put H2 trains on diesel tracks instead of building new electric infrastructure.