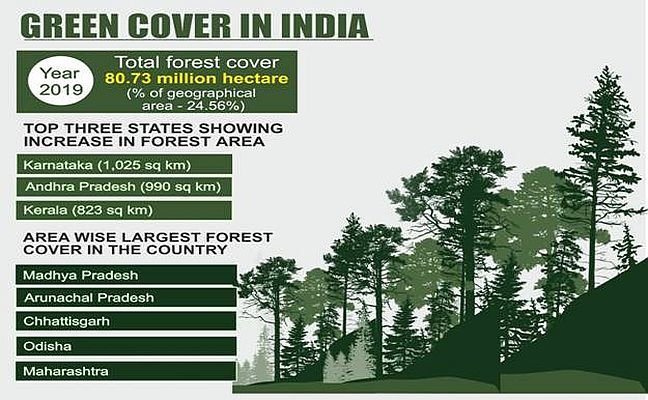 The report is published by the Forest Survey of India (FSI) which has been mandated to assess the forest and tree resources of the country including wall-to-wall forest cover mapping in a biennial cycle. Starting 1987, 16 assessment have been completed so far.

Announcing the results the Union Minister said that India is among few countries in the world where forest cover is consistently increasing.

In the present assessment, the total forest and tree cover of the country is 80.73 million hectare which is 24.56 percent of the geographical area of the country.

As compared to the assessment of 2017, there is an increase of 5,188 sq. km in the total forest and tree cover of the country.

Area-wise Madhya Pradesh has the largest forest cover in the country followed by Arunachal Pradesh, Chhattisgarh, Odisha and Maharashtra.

In terms of forest cover as percentage of total geographical area, the top five States are –

FSI’s assessment is largely based on digital data whether it is satellite data, vector boundaries of districts or data processing of field measurements.