Aluminium-Air Battery Is Being Tested On Indian Roads 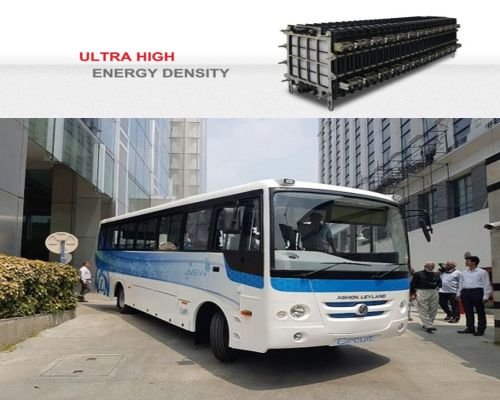 While Aluminium-Air battery (Al-Air) technology was thought to be at nascent stages of development, Indians have managed to plonk them into electric cars, 3-wheelers and trucks already.

A prototype battery pack with 25 aluminium-air Battery stacked in a series has been developed and is currently being tested in Tata Motors’ electric cars, in Ashok Leyland’s electric trucks and buses and in electric 3-wheelers with Mahindra.

The working of an Al-Air battery is pretty simple for it uses aluminium alloy plates as anode, water as electrolyte and an air electrode as cathode.

Basically, the air from the atmosphere gets sucked into the air cathode system which contains a catalyst. Oxygen in the air gets separated and reacts with water to generate Hydroxide (OH-) ions.

Ionic oxygen (O+) then reacts with the anode which leads to the formation of Aluminium Trihydroxide (Al(OH)3). This reaction causes energy to be released in the form of electricity.

There are plentiful positives with regard to the Aluminium-Air battery technology. It is lighter than a Li-ion battery as it uses aluminium, which is also abundantly and, crucially, locally available.

In addition, the Aluminium Hydroxide solution generated in the used battery can be processed to get the aluminium back.

What’s more, an Al-Air battery is claimed to have an energy density value of 8 kWh per kg as compared to 1-1.5 kWh per kg for Lithium and others.

Thus, theoretically, even with half the energy density, an Al-Air battery would provide 4 times higher range than an Li-ion equivalent.

Usage of Aluminium-Air battery tech in EVs could become a reality in India in the near future as the Indian Oil Corporation (IOC), along with Phinergy (Israeli clean energy startup), is working to commercialize them.

This is Businesswire Feed; edited by Clean-Future Team