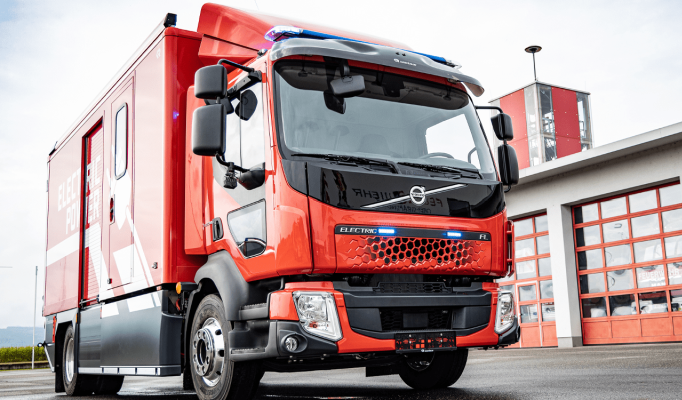 Rosenbauer is moving toward production of an electric fire truck named “Revolutionary Technology,” and Volvo Penta has announced that it has now partnered with Rosenbauer to supply the powertrain.

By adapting proven technology from Volvo Trucks and Volvo Buses, Volvo Penta and its customer Rosenbauer have introduced the world’s first electric fire truck, with a completely new vehicle architecture. This project is a true example of Volvo Penta’s customer-focused evolutionary approach.

Volvo Penta had announced emob partnership with Rosenbauer in 2019, and have gone from concept to start of production in record time.

The technology being used is not exactly new tech — it’s proven tech that is used elsewhere but has been adapted a bit for the unique size and needs of a fire truck. For example, 4 electric motors are used instead of the typical 3, yet in a relatively compact vehicle.

All four electric machines have to be able to run simultaneously – two for propulsion, one for the range extender to provide extra battery power, and one for electric power takeoff, if fire-fighters want to rotate the foam pump for example.

Volvo Penta also created a new Active Cooling Unit (ACU) in order to fit it into the compact space necessary in a fire truck, and the unit pulls 600V of power instead of the typical 24V in order to cool the truck as well as the battery.

Three of these fire trucks have already hit the streets. They are in Amsterdam, Berlin, and Dubai — cities that have taken leadership positions in electric mobility before.