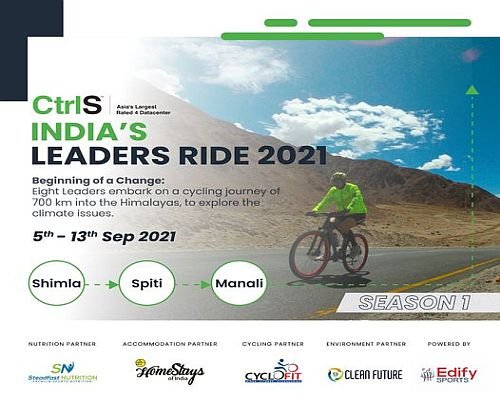 Climate change has led to a plethora of problems with the cities, states, country and the economy. These changes are not so much visible in cities as they are in regions abundant with nature – mountains & oceans, even though the reasons for climate change reside and emanate from cities.

Unless we all understand the issue by visiting the affected places, spread awareness and take action, it will not be long when the adverse effects of climate change will catch up and throng the hotbeds of population – our cities, with heat waves, droughts, famines, heavy rains, insect attacks, and more.

With the above backdrop, Edify Sports, conceptualized “India’s Leaders Ride 2021” and took India’s top cycling CXOs on a bicycling expedition across the cold desert of India – Spiti.

Here they are riding bicycle for a distance of 700 km across the Himalayas from 5-13 September, at an elevation of 7000 – 14930 feet and will undergo various experiences, interact with locals to understand the environmental issues and see the impact of climate change first-hand.

Idea being, these CXOs are the influencers & community leaders in society and in corporate world and thus have the capacity to implement the required change on ground.

Dr. SS Guleria, who is Secretary (Youth Services & Sports), Government of Himachal Pradesh did the honors by flagging off the ride and also agreeing to ride in the first leg of the cycling expedition starting from Shimla.

For this much needed noble endeavor Edify Sports received the support from CtrlS, Steadfast Nutrition, Homestays of India, Cyclofit India and Clean Future.