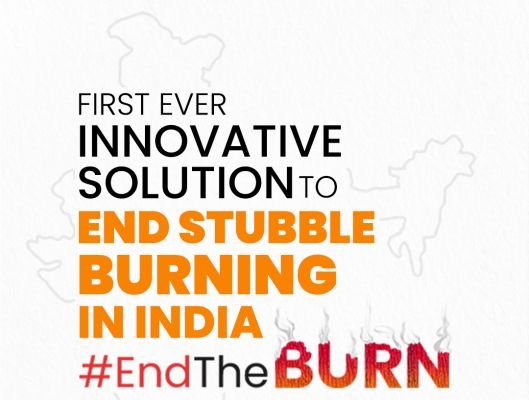 Each fall, some paddy farmers in India’s northern state of Haryana set fire to the leftover stalks following the rice harvest in order to clear the area for wheat sowing. Stubble burning happens worldwide, but is notably prevalent in India, the world’s largest supplier of rice. The flames deplete soil nutrients and contribute to air pollution. They can account for up to 45 percent of Delhi’s pollution during the crop-burning season.

However, this time, a small number of farmers agreed to hand their property over for a trial in Haryana and adjoining Punjab as an alternative to ecologically damaging stubble burning. Around 16 hectares (40 acres) of rice field were serviced by a tractor spraying an enzyme that converts stubble to usable fertilizer in less than a month.

This agricultural residue management initiative, India’s largest-ever effort to eradicate stubble burning, aims to put an end to the yearly scorching of more than 2.3 million hectares (9,000 square miles) of rice fields. The initiative was designed and is being driven by nurture.farm, a digital platform for sustainable agriculture.

Over 700 spraying equipment were used to cover 170,000 hectares across 23 districts. The experiment enrolled about 25,000 farmers.

The trial discovered that almost 1 million tonnes of carbon dioxide emissions were avoided. Next year, the initiative will extend to encompass over 800,000 hectares of land, or nearly 40% of the area typically burnt.