Airbus Is Pursuing Creation Of “Hydrogen Hubs” At Airports 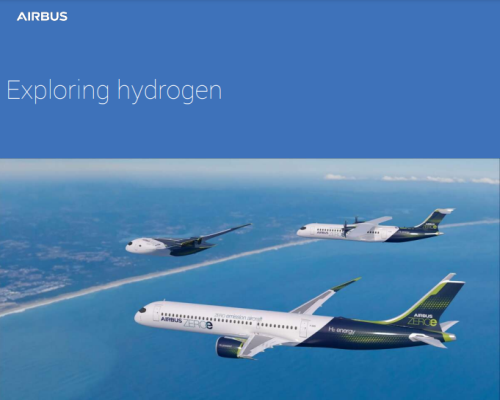 Airbus has officially signed a deal with major industrial gas company Linde to build hydrogen hubs at airports across the world. Currently, airports in France, Italy, Japan, Singapore, and South Korea have signed on to the hub concept, which is initially aimed at integrating hydrogen into ground operations.

Hydrogen is not a completely clean-burning fuel at the moment, because nitrogen oxides are part of the emissions mix. On the plus side, when combusted, hydrogen only releases trace quantities of carbon dioxide. Furthermore, there are no airborne pollutants when hydrogen is utilized in a fuel cell to create energy. The sole byproduct is water.

The issue is that the present world economy is based on hydrogen, which is mostly produced by steam reforming, with natural gas serving as the principal fuel. Coal and recovered industrial waste are also included.

This don’t sound particularly attractive from a planet-saving point of view.

So Airbus is looking for more sustainable hydrogen procurement, and it is focusing on green hydrogen from renewable resources, which gives suppliers like Linde even more reason to explore more sustainable sourcing.

Hydrogen is a high-potential technology with three times the specific energy-per-unit mass of typical jet fuel. It emits no CO2 emissions when created from renewable energy by electrolysis, allowing renewable energy to potentially power huge airplanes over long distances without the undesired by-product of CO2 emissions.

At present, Airbus is considering two pathways for hydrogen in aircraft:

Airbus anticipates making a choice by 2025. In any case, the business believes green hydrogen offers extraordinary potential as a clean aviation fuel and will most likely be a solution for the aerospace and many other industries to reach their climate-neutral commitments.